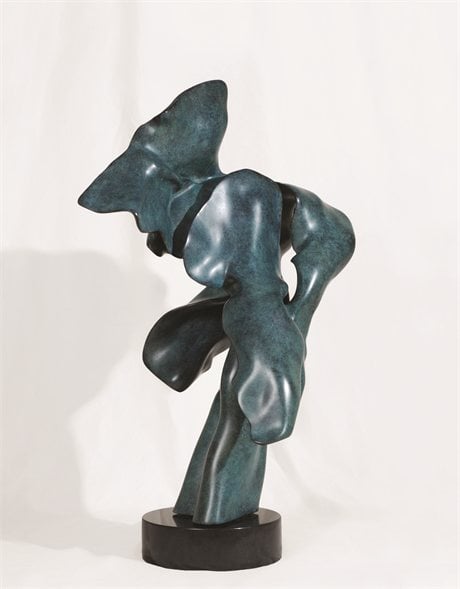 Traditional sculpture holds its own in a changing world

There seems little doubt that the art market is now on the cusp of what could be an important structural change as the global credit crunch begins to impact on art collectors and their buying habits. The auction houses are already reported to be preparing to undertake major reorganizations in the new year with redundancies a strong possibility. Who knows how many galleries will be forced to downsize or close altogether?

Although most sectors of the market will feel the pinch, contemporary art will probably be hardest hit since in recent years it has been the target of the most bullish speculation by outsiders who sought to to capitalise on its fundamental inefficiency and lack of regulation.

On the plus side, going forward we may see a return to critical judgement, which has been one of the most obvious casualties of the hype-driven boom of the last five years. Whether this will mean a decline of interest in conceptual art remains a moot point, but if it refocuses attention on traditional skills and expertise, on painting and sculpture that has been carefully conceived and well-made, then that has to be a good thing.

Already the divide between so-called conceptual or idea-based art and what is often mistakenly referred to as ‘traditional’ sculpture – objects made from clay, cast in bronze or carved in marble – is becoming clearer by the day.

One sculptor who fits into this latter category is the American artist Helaine Blumenfeld, who is the subject of a selling exhibition at the gallery of London sculpture dealer Robert Bowman until January 23rd.

Blumenfeld’s billowing forms in marble and bronze have earned her an extraordinarily wide following in recent years and her reputation continues to grow, although quite how she has acquired her current lofty status in so competitive a contemporary marketplace is something of a mystery.

She trained under the emigré Russian artist Ossip Zadkine (1890-1967), who came to prominence in France between the wars, and in many ways her work reflects that much earlier sculptural heritage. Much of it is defiantly abstract – flapping, billowing, undulating forms that nevertheless retain vague allusions to the human body and to organic, botanical forms. Some are cast in bronze, variously patinated, while others have been carved in marble.

The new selling exhibition at Robert Bowman Modern is entitled ‘Letting Go’ and, according to the artist, “explores the idea of trying to free ourselves from the issues that hold us back”. For this series, she says she had to cut loose from her obsession with marble and create her clay models without thinking of the implicit limits of translating them into stone. In recent years Blumenfeld has worked closely with the great artisan carvers based in the Italian marble commune of Pietrasanta, where skilled craftsmen translate her clay forms into marble.

To be contemporary, Blumenfeld maintains, sculpture does not need to divorce itself from traditional materials and techniques. “I fear that the craft of sculpture is in danger of being marginalized as ‘The Idea’ and ‘The Concept’ become increasingly celebrated,” she says. “One hears all too much about ‘the cutting edge’. I believe that work in any media can be on that edge. It is not about using new materials; it is about pushing the materials and forms you do use to their limits. It is about reaching beyond the established frontiers in whatever discipline engages one. Above all, it is about infusing the energy of your own being into the work, thus transforming it and extending it into another sphere.”

In 2007 Blumenfeld won the award known as ‘Il Premio Pietrasanta e la Versilia Nel Mondo’, adding her name to the list of winners of the honour including Fernando Botero and Marc Quinn. Quinn is another artist who uses the Pietrasanta craftsmen to translate his ideas into marble. The most high-profile of his works to benefit from the Pietrasanta expertise was his statue of Alison Lapper on the Vacant Fourth Plinth in Trafalgar Square.

Helaine Blumenfeld’s most recent commission was for Wilfred Cass, the private collector/dealer and owner of a sculpture park in Goodwood, West Sussex, for whom she produced Spirit of Life, a 3.7m marble sculpture, the first monumental marble the Casses have ever commissioned. Earlier this year the Royal British Society of Sculptors held a major exhibition of her work and two weeks ago HRH The Queen and the Duke of Edinburgh were present at the University of Leicester Library where Blumenfeld’s work entitled Shadow Figures was unveiled.

Robert Bowman Modern is producing a hardback book on Blumenfeld to coincide with the London exhibition. In it, Blumenfeld says of her working method, “I begin every new sculpture without any preconceived idea of what I am going to do. The key for me is to almost lose consciousness. Each time I start a new piece in clay I tap into a part of myself with which I normally have little contact. I never use an armature to support what I am creating. This would limit me. However, there is a danger: sometimes the new piece will collapse in my frenzy to express it.”