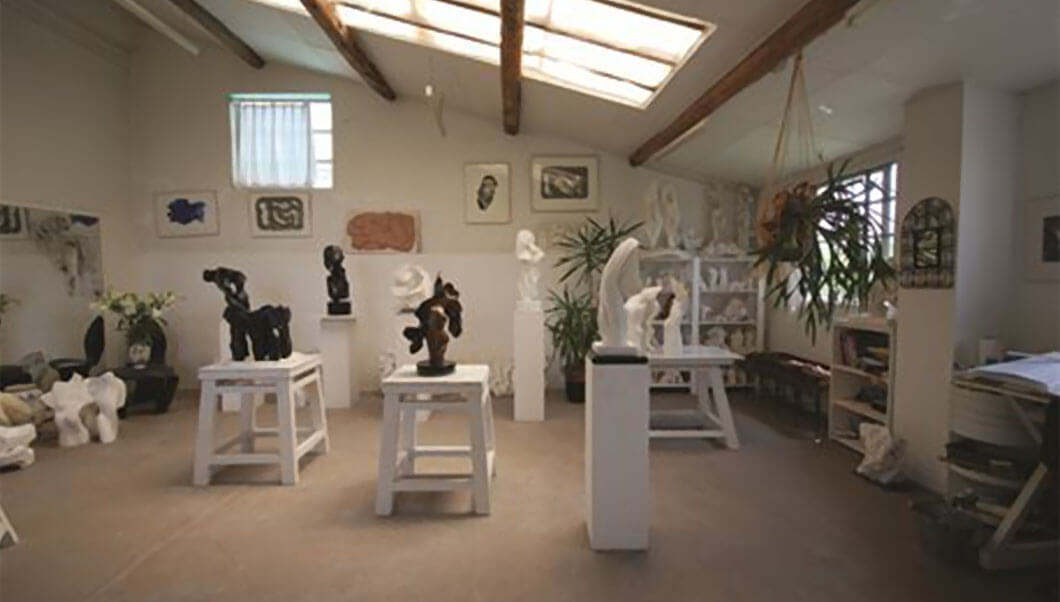 Blumenfeld’s daily practice remains grounded in the working of raw materials, a physical relationship that provides a channel for her imagination. She thrives in the solitary confines of her studio where she can think, dream, experiment and take risks without constraint. One recalls the words of the composer Erik Satie, who said of his creative process: “Before writing a work I go round it several times accompanied by myself.”

The artist’s working method invariably begins with the prodding and pushing of clay, knuckling and kneading it, twisting and teasing the obdurate lump until it conforms to her will. At every point in the process and whatever material she is working in, she is constantly meditating on how it might change and perform if and when it is transposed into another material, how it will reflect or absorb light, how it might generate natural colour, how it might contradict or confirm the material from which it is made.

She likes to hunker down in the palpable world, to get her hands dirty, often working late into the night, coaxing the clay into the rhythms and shapes her instincts dictate. At this stage, she seeks to lock out extraneous interference in order to free her subconscious mind. When it works, the process approaches something close to auto-hypnosis, a trance-like state in which the clay functions as a channel for her liberated imagination. It is perhaps not surprising that some of the objects emerging from these extended creative intervals resonate with a kind of ecstatic abandon. This may explain why many of her works are multi-layered, the construction of overlapping membranes functioning as a visual metaphor for the fugitive human soul – a mystery wrapped in an enigma. (Recently, Blumenfeld has begun leaving the surface of her clay and plaster models with a more variegated texture where the trace of the artist’s hand survives as testimony to the creative technique. Some of these works have made their way into bronze, a medium that preserves the imprints of hand on clay.) Only afterwards will she ponder the results for an extended period of time, sometimes over several days, reworking the model until it speaks back to her, confirming its readiness.

The processes at work here are all to do with transition and transformation. In the first instance, a raw material, usually clay, is made to take on a new form. That form is then directly transposed into another material – clay cast into plaster, for example. The plaster might then be reworked again, chiseled, scraped, chipped or shaved, nuanced into a subtly different shape or configuration. This object will then undergo a further transformation, perhaps pointed up into another scale or into yet another material – into marble, perhaps, or bronze. Each of these steps requires a keen insight, honed over decades, into which materials are right for which forms, which object will work on which scale, and which will not.

Today, the category of sculpture embraces a vast spectrum of processes and materials. Much of it is unconcerned with concepts of mass, volume, or scale, for the emphasis in fine art education long ago migrated towards other preoccupations relating to consumerism, popular culture, technology, and so on. A direct consequence of this cultural change is the renunciation of the artist’s hand and the proliferation of objects that could have been made by any one of any number of contemporary artists.

Helaine Blumenfeld, however, belongs to a generation of artists for whom the processes involved in making a work are critical to conveying its meaning. The decision as to whether to hone a marble surface to a pristine smoothness, or to give it a more textured finish, are too important to be delegated or left to chance. Similarly the complexities of bronze casting and the vast array of possibilities it offers in terms of patina, colour, texture, and so on, demand her continuous attention and involvement. Bronze has the capacity to replicate the minutest trace of the artist’s hand and thus demands the sort of attention to detail that other mediums do not. The finished work, whatever material it is made in, is thus the result of numerous creative decisions and so carries a freight of emotional content beyond what is immediately visible.

Another consequence of Blumenfeld’s hands-on approach to sculpture is the greater control it allows her in judging a work’s correct scale. Balance and proportions, which may harmonize perfectly in a small maquette or model, may require adjustment when scaled up, and vice versa. Similarly, the ability to impart monumentality to a small figure is a skill that over time becomes almost instinctive. Judgments of this kind are critical when making work for public locations where the context can have a profound effect on whether a work will succeed or fail.

Visiting her at her workshop at Studio Sem in Pietrasanta recently, Blumenfeld demonstrated this to me by reference to a large-scale work in marble currently nearing completion. An outcrop, which in the small-scale plaster maquette stood in perfect proportion to the rest of the work, required subtle manipulation when transposed into the much larger marble. This helps explain why Blumenfeld keeps a steady eye on every stage of the process, even when delegating some of the more muscular tasks of rough-cutting to Pietrasanta’s skilled artigiani. Such vigilance and care explains why she has become as adept at fulfilling large-scale projects as she is at working on a more intimate register.

Like many artists of her generation, Blumenfeld turned to sculpture out of a need to make a real three-dimensional object, to create a thing in the world using her own hands. That could not happen, however, without an imagination capable of conceiving a form that the object in question might take. For Blumenfeld, the conceptual component is inseparable from the physical process involved in giving the idea material form. When considered in that way – as a product of the indivisible combination of concept and craft – Blumenfeld’s sculpture is beyond tradition.