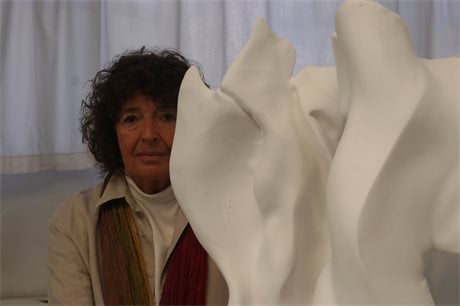 Helaine Blumenfeld with the plaster model for The Space Within (2007)

The First Face of Eve

Helaine Blumenfeld, a sculptress from the States, is this year’s winner of the coveted “Premio Pietrasanta e la Versilia nel Mondo” international award. The artist was choked with emotion as she accepted the prize, saying that to her it represents citizenship in the city she has for years now considered her second homeland and that has taught her much that has been fundamental in shaping her art, her lifestyle – and indeed her life. We met her in her workshop in Viale Marconi, a corner of peace and silence in this small but lively town.

In your opinion, what motivated the Premio committee’s decision to honour you with this award?

“Over the years I have organized various showings in England, inviting sculptors from Pietrasanta, among others. More specifically, I am curator of the Sculpture in the Garden show at the University of Leicester; this year, it’s dedicated to emerging sculptors and Studio Sem’s master craftsmen. I have also contributed to obtaining membership in the Royal British Society of Sculptors for several Versilia artists. All the monumental works I have produced, wherever in the world the commission originated, have all been made here in Pietrasanta – and it’s my policy to decline commissions if my client, for budgetary reasons, should request that I have them produced in other places.”

How did you “meet” Pietrasanta?
“When I first came her it was for bronze, not marble. About 30 years ago I had a show at the Bonino Gallery in New York. A collector was interested in purchasing one of my sculptures, but wasn’t satisfied with the casting. The gallery put me in touch with Alicia Penalba, who had been working in Versilia for some time, to discuss the idea of producing my bronzes in Pietrasanta. Alicia took me to Sem’s, and at that point I began working with marble as well as bronze. I was young then, with two children, and it wasn’t easy to organize my life. I came to Pietrasanta for two or three days a month, but it wasn’t enough, and in England I was unable to work as I would have liked. Until one day, when I realized that my absence wasn’t an insuperable problem for my children and my husband and I decided that I would spend a week of each month in Italy. And this decision changed my life – and my sculpture as well.”

What special things did you find her? Why is Pietrasanta so important to you?
“For me, Pietrasanta is a way of life: I find peace here, and stimuli to work. It’s true that I’m away from my family and friends, but I don’t feel alone because this is a very special place. Private, very intense. On Saturday and Sunday, if I don’t have to visit the workshops, I manage to make up to fifteen models: I feel enormously inspired. Pietrasanta is the center, the fulcrum of my work.”

A lot of people say that Pietrasanta has changed in recent years; some people are critical of what it has become. What do you think?
“I don’t agree. I don’t find it changed at all; but if it has, it’s changed for the better. Sem’s is always full of young people … there is more opportunity than there ever was, and more good will. The whole environment is more generous, and there’s a profound sense of community.”

What significance do you attach to the award you have received?
“I have won many awards in my life, but I have never been as enthusiastic about one as I am this time. It was very, very special … there were so many people on the evening of the award ceremony and I was deeply stirred. This was a prize awarded me by my second homeland. When they told me I was going to be awarded the prize I was worried because I didn’t have any works for the show, but the Fonderia Mariani was an incredible help in getting the pieces ready in time.”

Do you have any special memories of your years here?
More than special memories, I have the certainty that if I had not come to Pietrasanta I never would have become the artist I am today. Of course I owe a lot to Sem and I have many fond memories of him, above all of his willingness to help. He cast my first works without bothering about the fact that I didn’t have the money to pay him. This attitude of his was a great encouragement. Pietrasanta has everything an artist could want in order to work: you’re literally surrounded by specialized professionals, whatever your medium. And here, I feel free to think for myself and to create anything I want. Pietrasanta nurtures the artist’s soul.”