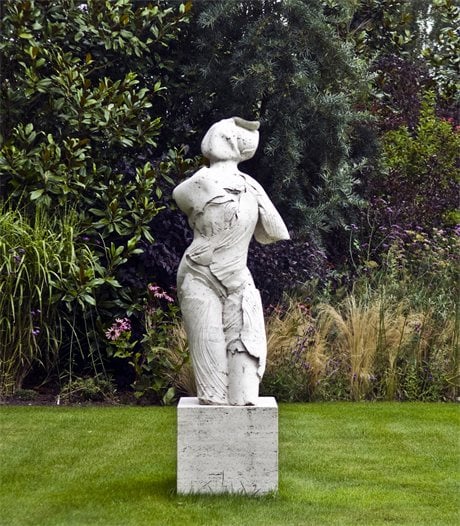 Nothing matches the eroticism and languid sensuality of a carved piece of white marble. It is a material so versatile that it can be made to look as gassamer-thin and diaphanous as cloth, as crystalline as snow, or as smooth as flesh. Helaine Blumenfeld, a New Yorker who has settled in Cambridgeshire, is one of the UK’s most skilled at giving rock the breath of life. She has not been fashionable, she has not been cool. The trend in recent times has been towards sculpture made of found objects – driftwood, beds, even cows.

But, with the vogue for the handmade suddenly back, Dr Blumenfeld suddenly finds herself on the crest of a new wave of prominent DIY artists that includes Grayson Perry, Chris Ofili, even seamstress Tracey Emin. ‘Until recently, people working with a craft and beauty have been marginalised by those who don’t make their own work at all,’ she says.

Dr Blumenfeld was born in New York in 1942, her father a builder, her mother a Russian emigre who wrote poetry. At first, she seemed destined for a glittering career in academe – her years at university from the age of just 15 were capped by a stint at Oxford. But, after finishing her doctorate in political philosophy, she discovered that he was still searching for ‘a language capable of describing a realm that exists beyond words. The more words I had, the less articulate I became.’

It was in a New York bookshop, when browsing through volumes on the philosopher John Locke, that she met her husband, Yorick, son of the American fashion photographer Erwin Blumenfeld. At the age of 20, they married, and she started sculpting in clay, moving swiftly onto bronze, and then marble.

After the birth of their eldest son, Remy, who is now one of the top executives at ITV, the family moved from New York – a place of violent protests and wailing sirens in the late 1960s – to an 18th-century manor house in Grantchester, just outside Cambridge. Their second son, Jared, is Barack Obama’s environment tsar for most of the western states of America.

A devoted mother as well as sculptress, Dr Blumenfeld has made the conundrum of how to marry work with child-rearing a theme that is constant in her oeuvre, showing one side of Woman as a warrior, armoured and striding out into the world, and the other fragile and yielding.

‘I think Erwin’s work influenced me a great deal,’ she says, ‘yet, of course, you never know when you are being influenced. But he was immensely encouraging when I was just starting off, and spent days photographing my early sculptures.’

As she has grown older, Dr Blumenfeld’s view of women has become more ‘complicated,’ and the works in her new exhibition express themes of letting go and taking risks. ‘Most people are so concerned with what they might lose by taking risks that they don’t consider what they might gain,’ she explains, and many of her sculptures seem to defy physics in the way they lean over yet don’t fall down.

After a lifetime spent on the fringes of the British contemporary art world, Dr Blumenfeld is now at the top of her game, selling sculptures for between £10,000 and £90,000 – triple the value they had 10 years ago. She splits her time between Grantchester and Pietrasanta in Italy, home to the marble used by Michelangelo, and, more recently, Botero, where she has honed skills learnt from master craftsmen there, working in a studio she has rented since the 1960s.

When she is in Italy, Dr Blumenfeld works like a demon, often for 10 hours at a time without stopping, and testament to her diligence are the undersides of her strong, pliant hands, which are worn as smooth as soap.

We are a generation of Futurists, and marble denotes antiquity. But, somehow, Dr Blumenfeld makes it also timeless. She is an artist with passion, dedicated to making beautiful and enduring objects that may also comfort. ‘I think we are at risk of forgetting we have a soul,’ she says.

As we enter a period of growing uncertainty and, perhaps, greater reflection, the permanence and poetry of her sculptures seem destined to offer lasting solace to an increasingly wide audience.