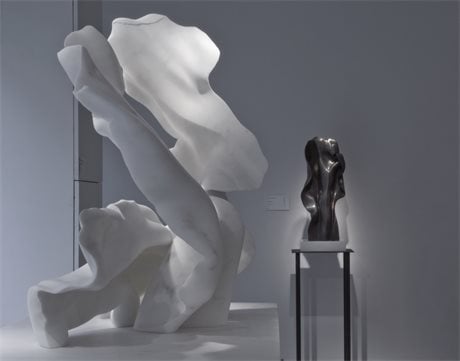 The Robert Bowman Gallery is proud to present the newest body of work by acclaimed sculptor Helaine Blumenfeld, following her enthusiastically received 2008 exhibition, Letting Go. “We weren’t planning on holding another Blumenfeld solo show so soon,” confessed the gallery’s owner, Robert Bowman, “but the sheer strength and power of these new pieces convinced us otherwise. It’s true that no two phases of Helaine’s oeuvre are alike, but we were still taken aback by the enormity and speed of the transformation which had occurred; these pieces are so much edgier, rougher and primal. The beauty and poetry of all Blumenfeld sculptures is still there, of course, but here these qualities are allied to a new rawness.”

The exhibition which takes place from May 6th to June 25th this year represents a personal breakthrough for Blumenfeld, who feels that this body of work comes closest to “expressing what is not only the condition of the artist but the human condition: vulnerability, turbulence, risk, fragility, dependency, strength, joy, continuity and, above all, beauty.” Characteristically
for Blumenfeld, emotional states as varied as agitation and tranquility are evoked using purely sculptural means – rough or smooth textures, jagged or soft edges, the interplay of solids and voids.

These works mark the most recent stage in the artist’s continued search for a visionary language – a language in which words are obsolete, that bypasses cultural specificities and boundaries. This search began after a chance encounter with Cycladic heads in the Naples Archaeological Museum showed her how sculpture could convey an entire life story with the barest of formal means. In his essay introducing the catalogue, art historian Dr Tom Flynn suggests that this experience “ignited [in the artist] a realisation that certain kinds of sculpture have what is called a numen, a divine power, sometimes referred to as soul, or spirit; a transcendent quality that defines explanation and remains mysterious. For Blumenfeld, the elusive numen is sufficiently powerful and seductive to justify a lifelong quest in its pursuit.”

“The greatest danger for an artist is to become trapped by your own aesthetic”, says Blumenfeld, “it prevents you from going any further.” Indicative of the sculptor’s openness to the challenge of change is Taking Risks/Emotional Landscape, a signature piece from 1982 the final cast of which will be included in this show. “The rawness of that work, the risk it involved, lay in physically opening it up,” explains Blumenfeld of the 7-part sculpture, which can be arranged in different ways. “I feel that my newest work, whilst revisiting the major themes behind that 1982 piece, comes at them from another angle. Now I have condensed the rawness into one piece; the taking apart is a mental rather than a physical act.”

The compelling nature of Blumenfeld’s vision has been recognized throughout her career and has led to exhibitions with renowned modern masters such as Brancusi and Moore as well as commissions throughout Europe and North America. Most recently, the sculptures in Letting Go were proclaimed in The Financial Times by Simon de Burton “the Henry Moores of the Future.”

For Blumenfeld, however, what matters most is that people genuinely love the work; “you can only experience art if you’re on your own edge”, she argues.

The ethos behind Robert Bowman Modern Gallery at 34 Duke Street is to show exciting contemporary sculpture using traditional media. Helaine Blumenfeld represents the embodiment of this ethos. The exhibition will be an opportunity to view new work by this acclaimed sculptor. The introduction to the exhibition catalogue is written by distinguished art critic and historian Dr Tom Flynn, and all works will be for sale.