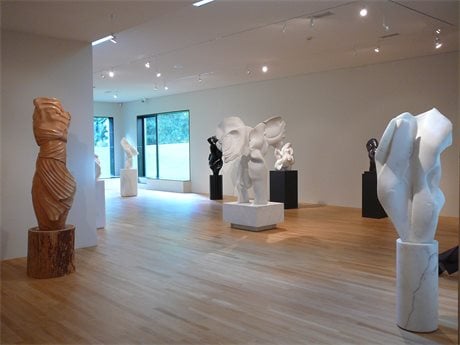 The Harmony of Helaine

For an afternoon it seemed as if I were living in an atmosphere of other times when on the 3rd of last June I was in Wageningen Holland to present an exhibition of Helaine Blumenfeld’s work. In a 19th century villa (which has been renovated to perfection with ‘agile’ additions of contemporary architecture) lies the Het Depot Gallery which is dedicated to sculpture. It is patronised by the Utopa Foundation and is very active in the field of contemporary art and culture. As I went down into the room where Helaine’s sculptures were exhibited I was lost for words. The room in itself, the natural light, the garden that flowed into the scene through a windowed view: all this contributed to the sculptures taking on a life of their own, each independent from the other, in a complete harmony of forms and volumes, of lights and shadows. What was unusual was my unforeseen amazement given that I had already seen almost all of the sculptures presented before, having had the pleasure of seeing them either in their completed forms or as maquettes in Pietrasanta. My stupor must have been due not only to the atmosphere of the space adapted for sculpture and winning by itself, but above all due to this very singular vision of numerous works by Helaine Blumenfeld gathered together for the occasion.

I realise that what was spontaneous in this context was a special harmony, the harmony that Helaine knows how to confer upon her creations, that extra touch which makes one of her sculptures become a work of art, while any other remains only an inanimate object. It is not easy to reach a state of harmony – that state of equilibrium which does not create any contrast neither in the work itself, nor in the bosom of creativity of the artist herself. It is, above all, an harmony that supports the challenge of diverse materials, whose range includes the impenetrable consistency of bronze, the snow-white candour of marble, the intimate heart of wood and the almost impalpability and transparency of crystal. Helaine habitually confronts herself with all these expressions, while, at the same time, retaining as a constant the common characteristics of her artistic language. Thus, in a similar environment as, for example, this at the Het Depot Gallery, the viewer may admire the power of Ascent (2007) – a monumental sculpture in bronze which stands out formidably at the park’s entrance, or its counterpart in marble inside the gallery; the delicacy of her Messenger of the Spirit (2006) in delicate crystal and Il Vento (2007) translated, however, also in bronze (2006). At times creations with the same theme are expressed with different materials, but the works which are derived from them are completely diverse. This is another of the characteristics of Helaine Blumenfeld’s works, that is that by maintaining a constancy of certain criteria a difference comes to be accentuated. Also because her sculptures are always and absolutely unpredictable in their three-dimensionality and they surprise one with their aspect each time unexpected when one is offered a new angle to observe.

Some time ago Helaine and I immersed ourselves in an intense conversation from which it emerged that one of the breaking-out factors which makes Helaine’s creative chords vibrate is, above all, the relation running between order and chaos. According to the artist, in fact, it is important to abandon yourself to chaos, let yourself go to until where it takes you, and then, in a gradual way, be able to return back again to a re-established order. It is in this state of total confusion that the creative vein is released, and the dexterity of the artist lies, in a second moment, in recognising it and guiding it, leading it within its own parameters without, however, suffocating it, thus putting together what is coherent, in such a way as to translate it into a product that can be enjoyed by all. The artist becomes the go between a Nietzschean Dionysian spirit and the general public thus immortalising a single and unique moment with an incessant becoming.

And it is right in this context that Helaine Blumenfeld reveals herself more and more each day – and therefore in each new work – as being an extremely courageous artist, an artist who has no fear of risking, of attempting a new path by following fresh inspiration, while maybe throwing herself blindly headfirst into a still unknown undertaking, the final result of which is unknown even to her. But now Helaine is confident. She has found an equilibrium and a sense of security which do not scare her into following her own instincts, allowing her to listen to that inner voice which, spurs her to press on with the research into her work, to modify herself and grow together with it. Helaine instinctively continues to listen to herself and to follow her creative eye inside her, which guides and renews her. It is almost like a fever, a necessity of revisiting herself, of exploring new possibilities from which emerge her profound hidden ‘I’, associations up until now ignored, dormant emotions in the past which come out like an impulse of fondest memories. The important thing is to not let herself ‘overdo’ anything with this potent, pulsating energy, but channel it instead into a transcribing of materials. Heart and mind work together in a brought-about explicit equilibrium by sculptures, which are in common not only because of a common language, but because they are themselves unique, as is unique every phase of this complex creative process.

And this language is characterised by an indefinable gracefulness, an immaterial lightness of weight in the material, perceptible both in her most minute compositions and along her range right up to her monumental sculptures. As is the case for most artists, Helaine’s language today is very articulated thanks to a constant development that she has known throughout the years, years of inner growth, of exploration of her own limits and recognition of her own aims. Starting out with apparently simplified shapes, mostly of an abstract nature, Helaine concentrated on lines which were almost more recognisable from a figurative point of view, as for example in Pleiades (1995) or in Destiny (1993), thus leading her along an anthropomorphic – mythological theme. Over time and with a natural evolution, her lines became more essential, almost less ‘baroque’ and began to hint at a reference rather than representing it as a whole. In this way the artist stimulates the capacity of observance in the viewers, she invites them to stop, to ponder upon certain aspects rather than others. The sculptures, having become so independent, have passed on to a successive phase. It is as if they are adult and defined characters who, once reaching full maturity and awareness of themselves, now need some kind of confrontation or connection. This is how her compositions of sculptures united by an intimate co-participation came into being, like the series of Space Within (2006 and 2007) or by a deep complicity relating to a common achievement, as in Angels (2006). And this new communion confers a renewed energy upon her works, a dynamic tension revealed both by their evident physical three-dimensionality and by a three-dimensionality that can only be intuited. The spaces for her ‘empties’ are just as important as those for her ‘full’ works, because they add a hypothetical fourth dimension to the compositions, that accent of pulsation that determines their dynamism.

Having reached this state of chorality, of common accent and exchange, now Helaine is ready to face a new challenge about to emerge, which relies upon all the elements recognised so far. This new phase is in fact marked by a moment of detachment, an individual hovering over an explosive moment of liberating flight ‘in fieri’, in which the artist, as in an instant photo, freezes the moment of incessant becoming in a flash – this time, though, rendering it immortal by the consistency of marble or bronze. This however is an extremely complex operation. It demands of the artist an acquired awareness of herself and such a force that allows her, first of all, to detach herself from her world and, later, embark upon her flight. The work is, anyway, a ‘translation’ of the artist, a reflection of her inner world, which consciously or unconsciously comes to be revealed to us.