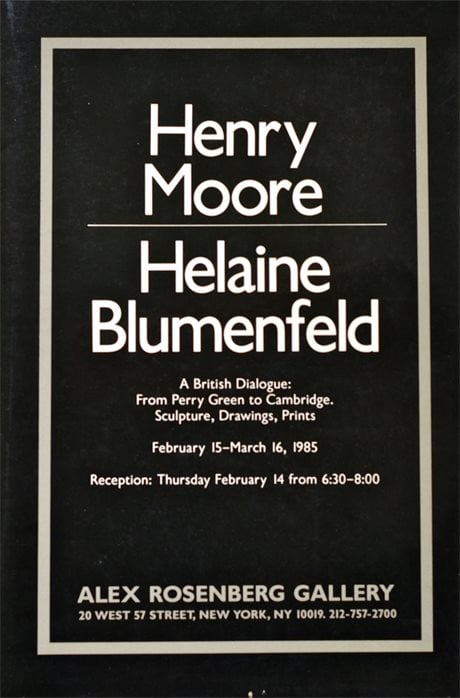 “When I was asked if I would show with another sculptor, I said, ‘No; I never have.’” There were further discussions with the gallery, and finally Blumenfeld, “ready to get my guns out,” she says, asked who the other sculptor was. It was Henry Moore. “That stopped me. You can’t really say, ‘I won’t show with Henry Moore.’”

The resultant “dialogue” brought together two sculptors whose abstract forms have much in common but at the same time reveal divergent approaches to the medium. Like Moore, Blumenfeld works in marble and bronze, but many of her sculptures, which have separate parts, eschew a fixed base, allowing them to be in different positions. For Blumenfeld, it’s a way of representing ever-changing human relationships.

My work is in many ways in opposition to Moore’s,” she says. “It’s another concept of form. I don’t believe in fixed positioning of sculpture. I’m more concerned with sensuality than he is. I really am not trying to portray a natural landscape; I’m trying to express emotion and emotional relationships with an aesthetic form. I count on the active participation of whoever’s looking at the sculpture to move it, to change it, to experiment with form.