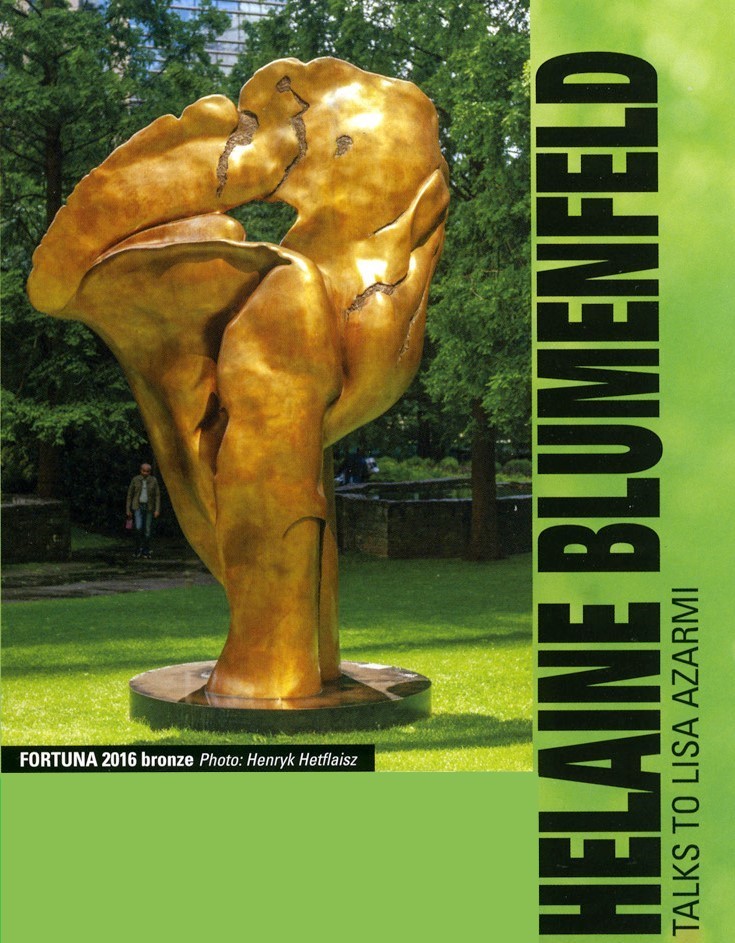 LISA AZARMI: The sculptor Helaine Blumenfeld, has spent a lifetime unashamedly in pursuit of beauty. In an art world obsessed by the conceptual, Blumenfeld has carved her own reality, something which fared her well during 2020 as the pandemic raged.

I was fortunate to catch up with Helaine after lock-down and see her most recent exhibition, “LOOKING UP: Helaine Blumenfeld at Canary Wharf.”

During these oppressive and lonely times, more and more people have turned toward the arts for respite and positivity. We talked about the importance of art as a tool to aid positive mental health and well-being: how art can capture the mind and body and raise them up beyond the “everyday”; and the importance of the transcendent quality of art, both for the artist/maker and viewer.

Fearless and optimistic as always, Helaine and I discussed how the world has changed for the worse. But, also how it could change again, for the better. In her own words “Art is a committment to risk, a reflection of life — nothing stays the same … “

Society could become more positive and “creatively” focussed with the right leadership and systemic financial government investment. This would have massive, positive implications and repercussions for humanity as a whole.

As an American living in the UK, Helaine recalled, with great enthusiasm Franklin D Roosevelt’s “New Deal Art Project”, and how positively its ripples continued to affect generations of artists in the US. With correct funding, she believes this type of policy could be re-invented and implemented in the US and the UK. In fact, we agreed that any country and government that values artists, creatives and thriving communities should invest in the future of art through state funding.

HELAINE BLUMENFELD: The COVID-19 pandemic has had a sudden and overwhelming impact on the Arts all over the world. So many artists as well as those working for institutions that support the arts have lost employment. Artists are demoralised. People are demoralised.

As an artist and sculptor, I feel strongly that we need to do something to revitalise artists, arts institutions, and by extension, our communities at large. The world has never been in greater need of the restorative power of art.

My hope and ambition is to see a worldwide programme established using the model of the Public Works of Art Project (1933-34) and the Federal Art Project (1935-43) that President Franklin D Roosevelt endorsed during the Great Depression of the 1930s.

In some ways, 2020 has many parallels to 1935. All over the world unemployment is high, we are threatened by recession, and there is an urgent need for communities to come together and to be re-energised. In the early phase of the Great Depression, President Herbert Hoover repeatedly claimed it would disappear. FDR pledged a New Deal.

I have always been impressed with the key role played by George Biddle, an artist and childhood friend of FDR, in founding the Federal Art Project, which employed more than 10,000 artists under the umbrella of the Works Progress Administration (WPA). He believed that the Arts could help lead communities out of the difficult situations they were facing and lay the foundation for culturally enriching and energising communities for the future.

At the basis of this program was Roosevelt’s belief, encouraged by Biddle, that the arts played a fundamental role in a democratic society. “I, too, have a dream,” FDR said, “to show people in the out-of-the-way places, some of whom are not only in small villages but in corners of New York City — something they cannot get from between the covers of books — some real paintings and prints and etchings …”

I firmly believe that in order to address the horrendous problems facing creatives today, it is time to take Roosevelt’s initiative. Artists must lead the way and encouraging their governments to consider adopting and developing a program like the WPA Federal Art Project.

The primary goals of these projects were to employ out-of-work artists and to provide art for municipal buildings and public spaces. Artists were paid a weekly wage; institutions such as schools, hospitals, and public buildings paid only for the cost of materials. It commissioned a significant body of public art, and sustained some 10,000 artists and craft workers during the Great Depression.

Moreover, the programme sought to bring art and artists into the everyday life of communities throughout the United States, by establishing more than 100 community art centres that provided exhibitions and art lessons in cities and towns all over the country. And this, in turn, led to a national restoration of public spirit, improved well-being and improved mental health.

The result was that these programs not only kept artists in work, they gave an enormous boost to art in the United States, raised the morale of artists and led to the explosion of creativity in American art following the Second World War.

More than 200,000 works of art — murals, paintings, sculpture, graphic art, posters and photographs — were created as a result of the programme.

Now famous artists such as Jackson Pollock, Mark Rothko, Willem de Kooning and Dorothea Lange, whose iconic photographs of migrant families would come to define the era got their start in the Federal Art Project.

The national director of the project , Holger Cahill stated in 1936 that “The organization of the Project has proceeded on the principle that it is not the solitary genius but a sound general movement which maintains art as a vital, functioning part of any cultural scheme. Art is not a matter of rare, occasional masterpieces.”

A similar art project is needed today for many of the same reasons, not only to provide much needed financial stimulus, but also to provide art that will re-energise society, generate good will and pull communities together. This second point is crucial. This must not be merely an artists’ relief initiative. In order to be considered truly successful, the programme must set the stage for long-term impact by developing an arts infrastructure within and for the community.

Could such a project work today? Although the times and political climate we are living in today is very different, there are lessons to be learned that can be applied to a similar project that would be successful in the 2020s, and could be introduced as a worldwide initiative.

Firstly, the Federal Art Project was part of the WPA which was a much larger initiative. If a new project were to be successful, it would be advantageous to tie it to a larger jobs creation/economic stimulus project. The initiative should take a broad view of Art to encompass both visual arts and performing arts.

Job creation, training and development programmes should include artists as well as craftspeople and other “behind the scenes” workers who support the creation and dissemination of art.

Secondly, a new Art project would need to make sure it reached out to underserved communities rather than focus its efforts on large cities that are already cultural hubs. If the project is seen as elitist, it will fail. It should focus on supporting art projects that are out in public spaces, visible and part of the community — public buildings. hospitals, schools, post offices, housing projects, etc. There should be a drive to liberate art from the exclusivity of the private market and the elitism of museums, galleries and private homes. This will bring it to a broader public in spaces that they know and are easily accessible to them. Furthermore, the program should establish community art centers to provide ways for ordinary people to participate in the Arts in their own communities. In this way the Arts will be seen as a shared community asset rather than the exclusive province of “others.”

Finally, a new Art project should not be only about artists but also about building and diversifying the audience for the Arts. This would mean supporting regional and local programmes that provide opportunities for a wide range of people to experience Art as a part of everyday life. Art needs to be seen as an integral part of the community.

Although undoubtedly there would be many naysayers to such an ambitious project, its cultural legacy could be of long-standing benefit. The Federal Arts Project not only supported artists in the US, it also created a cultural environment which empowered and inspired ordinary Americans in dire times.

The addition benefit of this was a strengthened democracy at a time when it was under threat worldwide. These threats and challenges have parallels in today’s world. A programme which supports and strengthens art could have similar positive outcomes today when applied in the US or the UK and, if successful, globally. 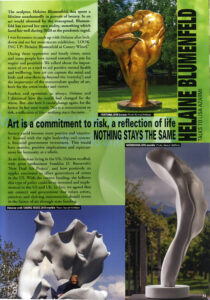 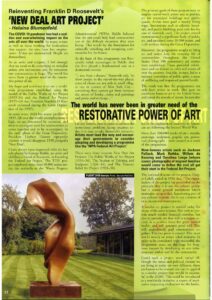 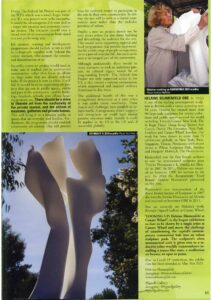