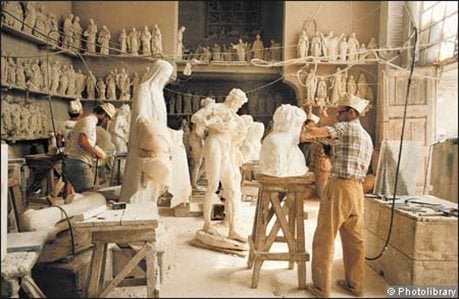 Artisans at work in a Pietrasanta studio

From Michelangelo to Damien Hirst, artists have been drawn to Pietrasanta’s quarries

Pietrasanta, a Tuscan town straddling the foothills of the Apuan Alps, was already known for its fine marble when Michelangelo visited the region. “I may as well try to raise the dead as tame these mountains,” he wrote to his brother Buonarroto in 1518. The maestro was staying in Pietrasanta on the orders of Pope Leo X, in the hope of extracting marble from a particularly lofty peak.

Strung out along the north-west coast of Tuscany, the 55km, limestone-rich mountain chain has been yielding stone since Roman times. In those days, Pietrasanta’s mountains were impossible to reach, so Carrara, 18km to the north, was the chief source of supply.

In the end, Michelangelo built a road up to the mountain, which he named Altissima (the highest). His reward was a marble of unsurpassed whiteness, ideal for sculpture. Artists – from Giambologna and Vasari to Joan Miro, Henry Moore and more recently Damien Hirst and Marc Quinn – have been flocking to Pietrasanta ever since.

Today, Monte Altissima’s refulgent blaze dominates Pietrasanta’s skyline, its bleached hue a testament to centuries of quarrying. The town’s symbiotic rapport with marble manifests itself everywhere: discreet window cornices adorn the handsome Renaissance houses and the cathedral is faced with dazzling alabaster-hued slabs. Just beyond the piazza, “The Key of the Dream” beckons, a seductively ocular form by Kan Yasuda, a contemporary Japanese artist.

Yasuda is one of nearly 300 artists who, lured by the presence of world-class marble workshops and bronze foundries, have bought homes in Pietrasanta in recent decades. Others include the Colombian sculptor Fernando Botero, the Polish artist Igor Mitoraj, and Helaine Blumenfeld, the vice-president of the Royal British Society of Sculptors.

“Originally, I came to Pietrasanta for the bronze,” Blumenfeld recalls as we chat in her luminous, garden-facing studio, crowded with clay and plaster models. “But as soon as I saw the marble, the idea that you could work with this difficult material was irresistible.”

Unlike many artists, Blumenfeld models directly out of clay with no armature to give form. “I have no idea what I am going to do,” she explains. “I like to feel completely free.”

The workshop tasked with translating Blumenfeld’s visions into marble is Studio Sem, which also realised Damien Hirst’s “Anatomy of an Angel”, the semi-flayed celestial messenger that sold for just over £1m at Sotheby’s in September 2008.

The studio was opened in 1957 by Sem Ghelardini whose legend – as artisan, partisan and bon viveur – lives on 12 years after his death. Ghelardini was also the first to see that Pietrasanta’s future lay in avant-garde sculpture, not with sacred statuary, commissions for which all but dried up after the Second Vatican Council in 1962. His studio became a magnet for abstractionists such as Henry Moore, Henry-Georges Adam and Andre Bloc.

On a sultry July morning, Studio Sem is full of activity. Marble lies all around in rugged blocks and piles of chips. The air rings with the sounds of drills and hammers. In open-fronted sheds, men wearing hats of folded newspaper are hammering and chiselling at sculptures in various stages of production.

Keara McMartin, Studio Sem’s American-born manager, explains the process. The first step is the sbozzatura, when the basic form is roughly carved out of the block. Then, during the smodellatura, a network of points showing the sculpture proportions is transferred from a plaster cast onto the roughed-out marble; the modellers chip around these points to reveal the contours in more detail, leaving what McMartin describes as “3mm of fat” – excess marble that must be trimmed off before it can go to the final phase. The marble is smoothed and polished in the rifinitura, the stage in which, according to McMartin, “the artist is most likely to get involved.”

The sight of such intense labour dispels all fantasies of the solitary artist chiselling away in a creative passion. Almost all the great marble maestri, including Bernini, Canova and Rodin, worked with assistants. The exception was Michelangelo whose refusal to delegate is renowned.

Yet even though there is no secret about sculpture’s collective parentage, mention of it can make artists defensive. At Studio Angeli, where Joan Miro and Henry Moore both had pieces made, one artist threatened to terminate our interview when I took a keen interest in the digitally scanned models and new robots used for the sbozzatura, as if acknowledging their existence undermined his own genius.

Hands-on involvement varies from artist to artist. Those that are based in Pietrasanta, such as Blumenfeld and Yasuda, are regular visitors to the studio, where they oversee every step of the process, particularly the rifinitura, and sometimes intervene physically.

Other artists are less involved. Studio Cervietti realises sculptures from plaster casts by Marc Quinn, including “Alison Lapper”, the woman with no arms and shortened legs who occupied the Trafalgar Square plinth in 2005. When I visit the studio, 33-year-old Luca is drilling the ear of one of Quinn’s latest sculptures, “Thomas Beatie”, a bearded, pregnant man, modelled on the eponymous, transgendered mother-to-be. Asked what he makes of the statue, Luca is diplomatic: “It’s particular,” he says.

According to proprietor, Franco Cervietti, Quinn visits regularly. “He gives instructions, checks the process and gives the OK. But he never puts his hand [on the marble].” Although his studio prefers not to discuss the matter, it’s no secret that Damien Hirst never visited Studio Sem; he sent a resin model for “Anatomy of an Angel” and approved the marble through photographs.

Hirst is not alone in his hands-off approach: Jeff Koons, who realised “Bourgeois Bust” (1991) at Studio Cervietti, and Maurizio Cattelan, who has his pieces made in Carrara, are also primarily “ideas men”. The extraordinary success of these artists is the fruit of an artistic culture which values concepts as highly as – and often much higher than – manual skill.

This tendency towards conceptualism has been gathering momentum since Duchamp’s urinal Fountain in 1917, and developed in the 1960s when artists such as Sol LeWitt advocated paointing-by-numbers, and Andy Warhol’s “Factory” celebrated the concept of studio as assembly line. Such artists were consciously defining themselves against the manuality of their forebears. As Sol LeWitt wrote: “When an artist uses a conceptual form of art … the execution is a perfunctory affair.”

The contemporary art emerging out of Pietrasanta has a different narrative. One glance at the galaxy of models of Christs, Madonnas and pagan gods that are still the bread and butter of most marble studios reminds you that sculptures such as “Anatomy of an Angel” are the fruit of a figurative aesthetic, rooted in the classical tradition.

Whereas avant-garde abstractionists, such as Moore, Yasuda and Blumenfeld, challenge Pietrasanta’s artisans to work in a different style, the contemporary figurative artists ask them to remain within their traditional framework and present the sculptures in a spirit of post-modern irony. As a consequence, the manuality that has gone into the work becomes curiously invisible, eclipsed by the work’s conceptual provocations – a pregnant man, a deconstructed angel.

None of the artisans resent that the artists get all the glory; all have a strong sense of the boundaries between the roles. “The artist has the idea but lacks the manuality. You have to respect the artist and the artist has to respect you,” explains Pierangelo Ghelardini, son of Sem and employed at his father’s studio as a modeller. But he adds: “I don’t mind that they get the recognition for the idea; what is frustrating is that we earn so little for what we do.” An average salary for a trained marmista is around €1,500 per month.

Little wonder studios are struggling to find good apprentices. “They could make more laying bricks,” McMartin laments. This state of affairs is ironic considering the price of work by artists such as Hirst and Quinn, whose sculpture of Alison Lapper went on sale for £500,000. “Our work doesn’t have anything to do with the [artwork’s] market price,” observes Franco Cervietti.

Ultimately, the lure of better paid, less physically demanding work will break the chain that has seen successive generations of families working in Pietrasanta’s studios for centuries. Yet all the artisans I spoke to were passionate about their work. Chipping away at a statue of Christ for Sydney Cathedral , Simone of Studio Sem tells me, pensively: “Working in marble gives you a sense of liberty. I don’t know why.” His words make a striking contrast to a comment by Koons in the catalogue for Jeff Koons: Popeye Series, his current show of cast inflatable toys at the Serpentine Gallery: “I really don’t care about objects: I don’t care about craft; what I care about is letting the viewer know that they are what’s important.”