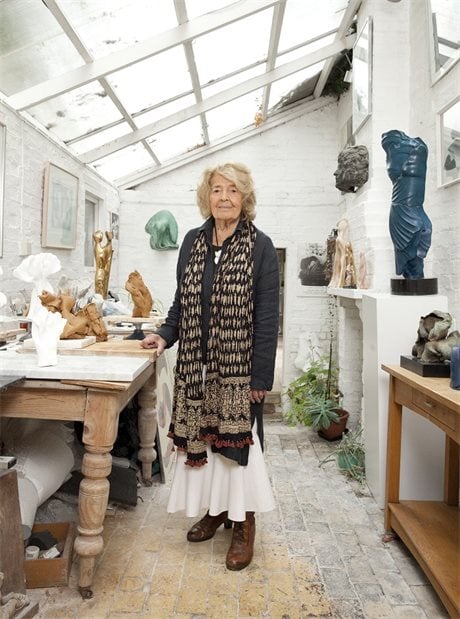 ‘I always had fantastic dreams. My ambition was to communicate that vision’

Helaine Blumenfeld, 76, works in bronze and marble. Her sculptures are in the collections of the Courtauld Gallery, Smithsonian and Tate. Large-scale examples are installed at Canary Wharf and opposite Hyde Park. In 2011, she was appointed honorary OBE for services to the arts.

What was your childhood or earliest ambition?

From the time I was very little, I had fantastic dreams. My ambition was somehow to communicate that vision. I thought it might mean becoming a writer — now I understand form is my medium.

Private school or state school? University or straight into work?

I grew up outside New York in a small community. My father was a builder — nobody went to private school in that neighbourhood. I studied at the University of Michigan, then went on to do a PhD in philosophy — I started at Columbia, then got a scholarship and went to Oxford. Later, I found myself in Paris. I decided I would study sculpture. I went to the Ecole de la Grande Chaumière. At first I was like an outcast — everyone there had been working in sculpture for years and the tutor kept asking me why I was coming back.

Who was or still is your mentor?

The great Russian sculptor Ossip Zadkine. He taught me the most important lesson: to source my subconscious for the raw material of my work.

How physically fit are you?

Working with sculpture is so demanding physically — you’ve got to meet the challenge. When something goes wrong, I fix it — I’ve had a knee replacement.

Ambition or talent: which matters more to success?

Talent. But believing in yourself is almost as important. Early in my career a successful female sculptor advised me that talent counted for only 10 per cent of success, and public relations for the rest. I’ve spent my life trying to disprove that.

How politically committed are you?

Very. I am so disturbed by the condition the world is in. The chaos, lack of vision, lack of leadership has increasingly been a focus of my sculpture.

What would you like to own that you don’t currently possess?

I love to fill my house and studio with flowers.

In what place are you happiest?

When I have my family with me. Happiness isn’t so much a place as a state of being.

What ambitions do you still have?

My hope is to reawaken the world to beauty, not just through my work but through all means possible. Beauty brings people together.

What drives you on?

What is the greatest achievement of your life so far?

Having brought two creative, socially aware sons into this world. A marriage that’s survived so many years. Seeing our grandchildren carry the vision forward.

What do you find most irritating in other people?

Apathy, arrogance, self-absorption and, most of all, insincerity. The last would rule out friendship for me but the others I think we all have.

If your 20-year-old self could see you now, what would she think?

She’d be thrilled to see the person I had become — and that I had realised that childhood ambition.

Which object that you’ve lost do you wish you still had?

Objects come and go. Holding on to ideas, goals, hopes is what matters to me. I haven’t lost any of them.

What is the greatest challenge of our time?

Survival of the world: whether we can deal with climate change and protect the planet. We need spiritual regeneration — restoring empathy, reviving the belief that there is something higher and more important than material success. We have to understand that our perspectives can be very different but we are united in our humanity.

Do you believe in an afterlife?

No. But I believe that immortality is possible through the contributions we make in our lifetime.

If you had to rate your satisfaction with your life so far, out of 10, what would you score?

‘Tree of Life’, a solo exhibition by Helaine Blumenfeld, is at Ely Cathedral, Cambridge, July 13-October 28. She also exhibits at the Venice Biennale until November 25