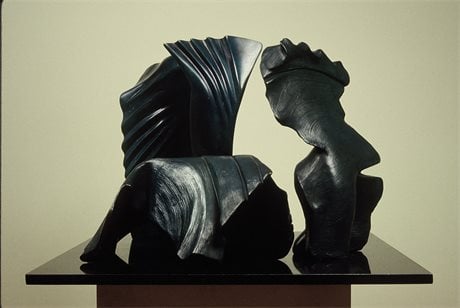 Despite the depressed state of public sponsorship for the arts at present, new galleries with Arts Council and local corporation backing do happily keep opening. The latest to my knowledge is Whitefriars in Coventry; after a trail run with local student t work it has as its official opening exhibition show of recent work by the American-born sculptor Helaine Blumenfeld, which runs until Sunday.

The building, which is going to be used as a regular sculpture gallery, is both beautiful and bizarre. It consists of a range of fourteenth-century cloister, built in the local pinkish sandstone, with above it an impressive timber-roofed hall, originally the white friars’ dormitory but bearing signs, in its Elizabethan windows, of a Tudor conversion to domestic purposes. The oddity is that this little medieval enclave survives under the wing, as it were, of a giant modern bypass road which cuts it off from the Cathedral and the rest of historic Coventry.

Still, somehow the two world co-exist, and that they do so is significant of the wide usefulness of the exhibition spaces inside; the Blumenfeld sculptures , which are very much of this century, even specifically of this decade, look completely at home in cloister and hall, the pink stone of the walls setting off admirably the plaster and fibre-glass whites, the extraordinarily rich and varied patinas of those in bronze (so deep and glowing, some of them, that they deceive the eye into supposing the sculpture to be made out of some serpentine stone).

Blumenfeld’s latest work shows a significant advance on her last London show at Leinster Fine Art three years ago. For one thing, she is the kind of sculptor who thinks and works naturally on a large scale, and the hints of preciosity in some of the table-sized works are assemblages of several pieces which can (and according to the artist should) be varied in disposition as far as circumstances allow.

Indeed, DANCE PROJECT: RECLINING WOMAN was meant from the beginning to be assembled by dancers in the course of a dance-work by Jacques d’Amboise, and so has to be made of something light and manoeuvrable – fibre-glass, in the event – though a commission is apparently in the offing for Blumenfeld to carve it in white marble for permanent installation. This work is characteristic of Blumenfeld in another way: though at first glance it appears to be abstract, the more one looks at it the more one can see the clear figurative references. The title helps too, but with others one needs no title to sense the couplings possible, the animal tensions which activate the works from within.

In some of the most recent pieces on can even see for the first time in Blumenfeld’s work, some possible like-mindedness with her first master, Zadkine: in particular the upwardly striving larval eruption of SOULS has something in common with Zadkine’s later work. But the predominant impression is one of determined, almost cussed, individuality. It is well worth going to Coventry to savour.