It could be a white tulip, or taught muscle. Hands clasped, entwined bodies half in bloom. For half a century, Helaine Blumenfeld OBE has been shaping the landscape of public and private sculpture, her striking semi-abstract work often finished in bone white marble and tan bronze, immediately recognisable for their free-flowing, mid-metamorphosis form. Daughter to a builder and painter, Blumenfeld grew up in Queens, New York, and received a PhD in political philosophy before studying art in Paris at the Académie de la Grande Chaumière under the Russian-born sculptor Ossip Zadkine. Two years later she held her first solo show of polished bronze figures at the Palais Pálffy, Vienna, and since then, has exhibited more than 70 shows worldwide, including a joint show with Henry Moore (arguably her closest aesthetic mirror-companion). “My hope is that my work might inspire people to overcome apathy and restore empathy,” she notes, “to revive the belief that there is a spiritual value that soars above the material.”

Blumenfeld fuses spiritual and material values in her largest solo exhibition to date, transforming London’s Canary Wharf into an urban sculpture park. Stretching from 1974 to the present day, over 25 Carrara marble, terracotta, cedar wood and bronze pieces now occupy the dockside centre of commerce. Curated by Ann Elliott, Looking Up concisely summarises the artist’s ongoing aim to enrich people’s lives and public spaces through sculpture, and offers a call to arms in an (increasingly at the time of writing) isolated world. Running alongside her permanent work Fortuna will be powerful recent sculptures Taking Risks, Illusion, Ascent and Toward The Precipice – among many others – until the summer.

In celebration of the show opening, I talked to Blumenfeld about navigating public space, secular spirituality and all-important optimism.

Why is it important that art occupies public spaces?

For years I’ve been involved in efforts to bring sculpture out of the galleries and into the streets where it can actually affect people in their daily lives. By doing so they can interact with the work, they have a chance to see something out of the context of a usually sterile space. Art can change the way we see reality. Everything I’ve done has been focused on beauty, and I want people to experience it, because in doing so, they have a way of understanding and exceeding the limits of their own lives. See a world outside of themselves, spiritually, and not necessarily in a religious sense. My most amazing exhibitions over the last couple of years have been in cathedrals, having people experience my work in those settings was transformative because I really saw them look up. They looked beyond.

We are increasingly looking down at our mobile phones. How has consumer technology changed how we navigate and experience public spaces?

We’re hyper-connected technologically, and yet we’re more isolated than ever. Many societies feel disconnected, but why? In part, because technology has destroyed intimacy and our sense of touch. We’re tapping, not touching. We’re missing learning from exploring physical dimensions. I never have signs on my work that say ‘don’t touch’, I want people to. That is the difference between seeing a painting – it can be visual and emotional, but it can’t necessarily be tactile. Years ago I had a show in New York for the blind and their description of what they saw with their hands was so close to what I was expressing. I realised that there’s a whole other world that we learn through our hands that we’re not getting right now. We have to acknowledge that. 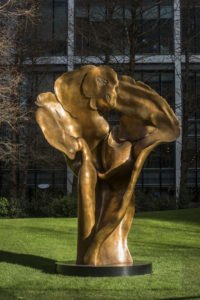 What themes and forms do you find yourself returning to?

In the beginning there were maybe eight themes in my work that I kept expressing in new ways and developing a new vocabulary for. What runs through all my work, though, is the question of intimacy. Whether we’re looking at ourselves, our understanding of who we are, or we’re looking at our relationship with someone else. It’s always looking at how we connect to ourselves and others. One of my newest series is called Exodus – I suppose a desire for something better has been a theme since the beginning of time.

Why do you enjoy working with materials Carrara marble, terracotta, cedar wood and bronze – what do they give your work?

Each has a different meaning to me. I always begin with clay, it connects with my psyche, my emotional world. When I work, I don’t even look at it, I work by feeling. I might do 20 models quickly before I settle on one that I want to carry further and then I’ll finish it in clay as much as I can. The decision then is what material should it be? If it is absolutely perfect when I look at it critically, I’ll do it in bronze, because what I want is a copy, a record of that creative thing I’ve made in detail. My fingerprints and my movement must stay. But if I feel it needs to grow and develop, I’ll use marble. With marble, you’re gradually expanding and exploring the initial idea, and it plays with light so fantastically. Travertine has a porous-ness and a sense of having been there forever, of timelessness. It looks rough but is smooth to the touch, so you get a nice perception play. Wood is used when the piece will come to life working with the grain.

Millions and millions go through Canary Wharf every year. That’s where we need art, where it can have a real effect. Public art is a way to participate with a very wide audience. I think that shared beauty can impart a sense of order and elevate the spirit, it can create a sense of shared history and community. The space throws up challenges – doing it in what I consider a secular cathedral – can I succeed there? Will people look up from all the things perplexing them, that are bringing them the whole world? Will they put their mobiles away, touch, come back and look again? Joseph Campbell once wrote an essay called ‘Art as revelation’. It can be exactly that if you come to it open-minded.

Your 2018 piece called Illusion is described as an optimistic work – what gives you hope?

What gives me tremendous optimism and really inspired me to agree to do this, was a commission from Canary Wharf a couple of years ago. I produced a large piece called Fortuna for a temporary site in Jubilee park, before it went to Wood Wharf. People began to gather around it all the time, the guards told me everybody who came to the park asked for it and had heard about it through word of mouth. They sat with it, held it, photographed it – the area around it had to be re-planted there was so much footfall. In the end, they decided not to move it because people would have been too upset. This reaction is such an important part of my process. The role of sculpture has changed so much over the years, it used to be purely commemorative. Now it gives identity to a place, a sense of civic ownership. To move that sculpture, they said, people would be outraged. So possibly, people are hungry for something more in their lives.