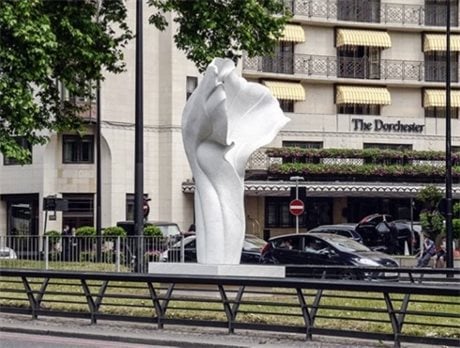 Sprit of Life at Park Lane

“Stop desecrating our public spaces with works of sculpture that have no aesthetic merit.” This was how the eminent critic, Richard Dorment began his open letter to Mayor, Borris Johnson, complaining about the state of public art in London.
“Bad public sculpture is in your face. It degrades the quality of daily life as surely as Muzak. It sets the teeth on edge and ruins the day,” he continued, with particular emphasis on the sculptures at Park Lane, opposite the Dorchester Hotel, previously home to a family of “giant jelly babies,” an open palm holding a life-size human figure, followed by a giant horse that Dorment described as “an expensive knick-knack from Harrods blown up to a size that would have appealed to Saddam Hussein.”
One can only imagine that Dorment and other objectors to this “festival of expensive tat” will be delighted by the most recent arrival at Park Lane. Spirit of Life is an extraordinary six-ton, wafer thin, white marble piece by acclaimed sculptor, Helaine Blumenfeld, whose work is currently being celebrated throughout Salisbury Cathedral.
“There is no escaping the the pain and fear which change involves,” says writer Nicola Upson in the forward to the Salisbury catalogue, “but every single piece that Blumenfeld has ever created is in some sense an effort to transform torment into beauty and hope, to visualise Kierkegaards’s premise that art- whilst it may begin with a scream- must transform that scream into music.”
Four meters high, Spirit of Life was transported on a flat bed truck and craned into place opposite the Dorchester Hotel.
One Londoner who is delighted by the sculpture is critic Richard Cork, who tells me: “Blumenfeld wants to regain the restorative power of art, and her sculpture brings us very close to the heart of her concerns.” The white marble piece, which Blumenfeld has honed into paper-like translucency, required a team of art movers of such dexterity that they were themselves being filmed for a BBC documentary to air in December.
After the installation on Park Lane was complete, Blumenfeld told Wall Street International, “Some people see it as an angel, others as a tree of life. But for me this it is about the positive power of beauty, of hope and of creation. I would like to see beautiful sculpture re-enter the lives of people – not just in art galleries but on the streets. I feel a commitment to provide a work that will not only enhance the environment but will increase awareness of the beauty around it. No longer are monumental sculptures commemorative or religious: they exist to give identity to a space, to create a place of meaning within a community.”
This is Blumenfeld’s second monumental sculpture at Hyde Park. Her first, Tempesta, can be seen by commuters passing by The Lancasters, opposite Kensington Gardens.

26/06/2013Wall Street International Magazine
Back to all press