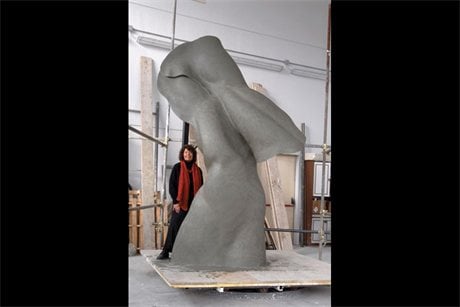 Helaine with Ascent in 2011

LONDON.- Internationally acclaimed sculptor Helaine Blumenfeld has been presented an honorary OBE for her outstanding contribution to art. She was presented her OBE by Rt Hon Jeremy Hunt, MP, Secretary of State for Culture, Olympics, Media and Sport at a private ceremony. Blumenfeld is one of the few non-British artists ever to have been honoured in this way. Honorary OBE’s are awarded to non-British subjects, and over the decades, only a relatively small number have been presented. Luminaries such as Pierce Brosnan, Bill Bryson, Raymond Blanc and Janet Susman have been recipients of this honorary award. Dr Blumenfeld said “As an American-born sculptor working in the timeless tradition of carving marble, I am thrilled to receive this Honorary OBE.” Helaine Blumenfeld was a favoured pupil of Ossip Zadkine, and her works have been hailed as ‘The Henry Moore’s of the future.’ In 2004 she was elected Vice President of Royal British Society of Sculptors, and in 2007 she won the Il Premio Pietrasanta e la Versilia Nel Mondo, adding her name to the list of winners of this honour including Botero, Pomodoro and Marc Quinn. Helaine was the first and remains the only woman to receive this prestigious award. In 2008 the Royal British Society of Sculptors held a major retrospective of her work. Helaine Blumenfeld has been invited to exhibit in the Piazza and Chiostro di S. Agostino in Pietrasanta, Tuscany. The solo show opens on 3rd September 2011. The Robert Bowman Modern Gallery has represented Helaine Blumenfeld since 2006.