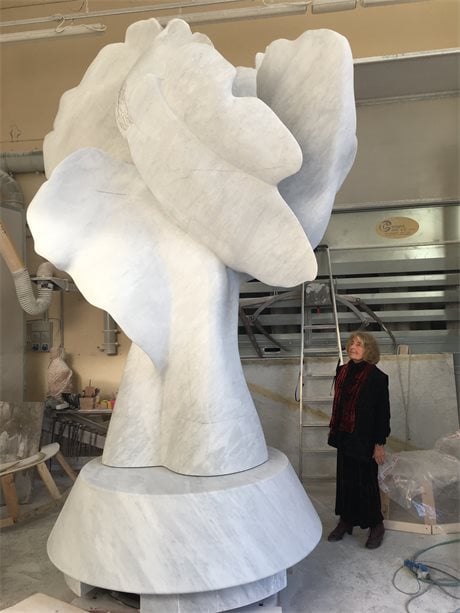 Blumenfeld with TREE OF LIFE: ENCOUNTER

Helaine Blumenfeld, the artist who has dedicated five decades to creating monumental bronze and marble sculptures, appears in the first film about her life and work ‘Hard Beauty’. The film, directed by acclaimed filmmaker Rupert Edwards, chronicles Blumenfeld’s artistic process as she works to complete ‘Tree of Life: Encounter’ a vast public commission for the Woolf Institute, Cambridge. The film will feature scenes from Paris, where Blumenfeld learnt her craft under the singular Ossip Zadkine, Italy, and the artist’s hometown Cambridge. Occupying a realm between figuration and abstraction, Blumenfeld turns impossibly hard material into strange, fluid form resonating kinetic energy. Ahead of the premiere, After Nyne caught up with the renowned artist to talk influences, the filming process, and sculpture as language.

Where did your relationship with sculpture begin?

‘Trying to describe my dreams as a child, I continually found that language failed me. It was only when I was in the National Museum of Naples looking at early Cycladic sculptures that I realised that the language I had been searching for was to be found in the forms of sculpture, not in words. It was an almost instantaneous discovery. I spent the next years in Paris becoming a sculptor and learning to translate my dreams into sculptures.’
Who do you consider your influences and what inspires you?
‘Working in Paris in the studio of Ossip Zadkine, I learned the dedication and commitment being a sculptor would demand of me. I was inspired by his integrity and search for “perfection” as well as his desire to express and develop certain themes in his work and to communicate the pain and disruption he experienced in a world in chaos. I continue to be inspired by trying to translate my dream world into forms that will communicate to the viewer.’

How did you find the filming process during the making of ‘Hard Beauty?’

‘Filming for Hard Beauty was an all-encompassing process that took more than 18 months to complete. It was emotional and exhilarating. I felt joyous and vulnerable. It was amazing. The team was brilliant and I felt I was deeply involved in the creation of a work of art. It was surreal in the sense that it had its own parameters that depended on the changing seasons and conditions of light. I had been involved in many documentaries over the years, but never in such a sustained and committed effort to create something of permanent value. The aim was to try and explore the secret workings of the creative process and I was at the centre of the exploration!’

How do your sculptural forms come into being, from conception to realisation?

‘This film follows the process of making a sculpture from its first conception as a clay model to the plaster enlargement, to the roughing out and finishing the marble, and ultimately to the installation of the completed work of art on the site it was created form, the Woolf Institute.’
From the monumental to delicate jewelry, scale is an important element in your work. How do you decide which forms lend themselves to which scale? Or is it rather an organic process?
‘It is an organic process. I don’t have any hard and fast rules. Each form is a new journey for me.’

Can you tell us a little about future projects?

‘At the moment I am very excited to be working toward a major solo exhibition at Ely Cathedral which will open in July. The title of the exhibition is “Tree of Life” and we will be bringing together 18 bronze and marble sculptures, including 7 new works.
‘I am also currently working on a monumental sculpture, METAMORPHOSIS, using digital technology including a 5 axis CNC router, laser scanning and 3D printing at Europe’s leading sculpture foundry, Pangolin Editions. METAMORPHOSIS has been commissioned by Canary Wharf Group for Wood Wharf, a new luxury residential quarter to be installed in 2019.’