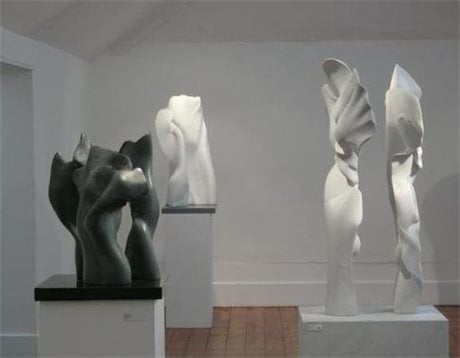 Back from the glizty hoopla of the opening of BCAM, the new wing of the Los Angeles County Museum to London and a more modest instituteion, the “Royal British Society of Sculptors” where the current show is sculpture by American born, now resident in England, Helaine Blumenfeld. Blumenfeld is the first woman to have been awarded the prestigious “International Sculpture Prize: Pietrasanta and Versilia in the World” and over her long career has developed a loyal following of collectors. Her work evolves from the long tradition of carving and in particular carving in marble that dominates this area most renowned for having produced the marble and the artisans for completing Michelangelo’s “David”.

When I arrive shortly before the opening, a team of movers are literally wrestling with the large components of “Angels: Harmony”, the biggest work in the show. Although looking deceptively light the pieces are heavy, awkward and fragile so it is with some relief that I see the work assembled safely. Overseeing it is Blumenfeld herself while on the installation team are sculptors, movers and the administrator for the Society.

Blumenfeld and I retire next door to celebrate its safe arrival over a cup of coffee. Blumenfeld tells me that she has decided to have this show on a shoe string budget as she wants to donate all the profits to the Society for some badly needed repairs to its building. She heartily believes in “giving back” in some way to the art that she has practiced for so many years.

The show is composed of pieces mainly from the last two years and marks a seed change in her work. I have seen her work over the last twenty years and have noticed that like all artists it seems to follow cycles. When I saw a show a few years ago she seemed to have become focused on the technique of carving, making the marble so thin that light could come through the stone, making folds so realistic that it seemed as if the work was composed of fabric which could move in the air. All a bit like painting the insect so realistically that a bird would pounce on the canvas.

Blumenfeld tells me she has recently started to work increasingly in bronze, which allows the work to move away from the need for an armature that it previously had. Although she works in Pietrasanta, a town renowned for stone, her move towards bronze has changed. “It is liberating for me,” she says “there are more opportunities and less limitation and the material doesn’t claim you.”

Bronze allows Blumenfeld to follow her normal method of working, entering into the work without a plan or preconception of what the work will become. She says that she has always been struck by a comment by Swiss sculptor Alberto Giacometti, that “if you start without vision, start making something, that is the vision. It is not the beginning that is the idea but the end is the idea.”

Back to the gallery to spend time with the recent work and I am impressed how the artist’s vision translated into bronze has made her lines seem crisper and more drawing-like. It is as if the material has breathed strength and simplicity into the pieces and as Blumenfeld herslef has admitted, you are no longer distracted by the mere beauty of it. The work appears more overtly figurative than other recent work but that is no bad thing, as Blumenfeld has always injected a universal humanism into the pieces. A humanism that also translates into the philanthropic element of donating the profits to the society that has a list of many sculptors including William Pye and Anthony Caro not to be sniffed at.