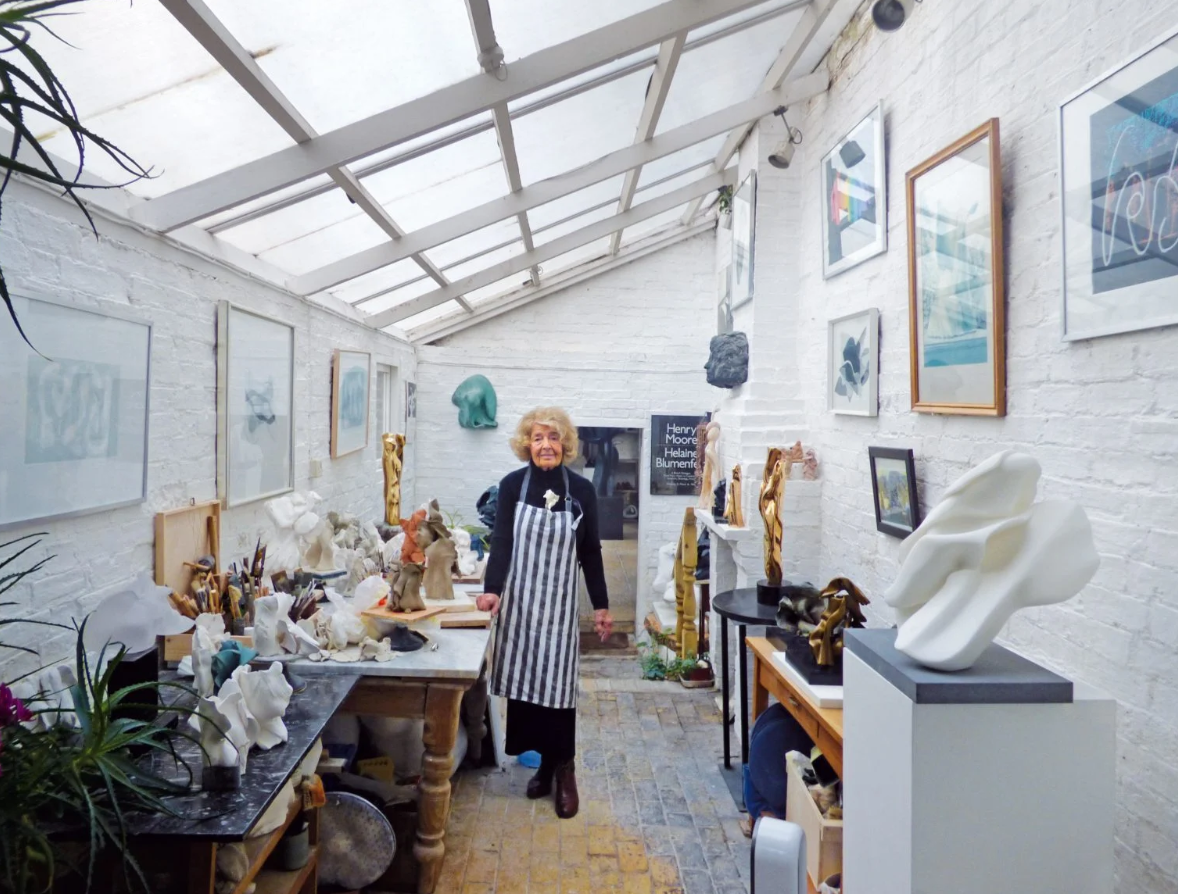 Caiti Grove meets influential abstract sculptor Helaine Blumenfeld, but dares not ask what she should feel about her work…

‘If anyone should have caught the virus, it should have been me.’ Helaine Blumenfeld was at Canary Wharf for the first two weeks of March positioning works made over decades in the outdoor space – bronze, wood, wafer-thin marbles that seem to waft in the breeze like fabric. ‘I was in very close proximity to a big group of people for a fortnight – when the lockdown came. I thought, “I’m next”.’

Fortunately, she didn’t catch it and self-isolated at home near Cambridge. ‘In the past, if anyone said to me, “what do you need?” I would say “time”. For years I’ve been going back and forth to Italy. I’m terribly worried [about Covid-19] but I have a lot of energy and feel very positive. I quite like this long period of little social engagement.’ Staying in one place is not usually part of this artist’s modus operandi. She is adaptable, flexible and as she says, pro-active.

In her early twenties, her new husband’s work took them to Paris. She signed up for an art school where students paid by the week, the Académie de la Grande Chaumière. Every Friday her tutor would say, as he looked in despair at her abstracts, ‘Are you really coming back next week?’But it was there that Russian sculptor Ossip Zadkine spotted Blumenfeld’s work and demanded the artist visit his salon that Sunday. Only 20 years old with limited French, it was a hesitant Blumenfeld who knocked at his studio door. It opened to reveal a roomful of men – even his own wife, a famous painter in her own right, wasn’t invited. ‘What are you doing here?’ Zadkine snapped. ‘I could see no one had told him I was not a man,’ explains Blumenfeld. But after that she went every day to work alongside him in his studio. ‘I gradually understood that if I wanted to go ahead with this, I had to accept that it’s as vital as breathing.’

By 1985 Blumenfeld was sharing an exhibition with Henry Moore in New York. A journalist from the New York Times approached her, ‘What am I supposed to feel?’ he asked. ‘You’re not supposed to feel anything in particular – everyone reacts differently,’ she replied. ‘It gives to you as much as you’re willing to give yourself.’ ‘Well I don’t,’ he retorted, ‘I don’t feel it, whatever “it” is.’ Helaine called over the doorman to speak to the journalist. He didn’t speak much English but often came to the gallery to look at the works. ‘Could you tell him what you see when you look at my work?’ she asked him. ‘I see the tension between me and my wife after an argument, the fragile atmosphere after a disagreement has been resolved.’ ‘He was amazing,’ Helaine recalls. ‘You shouldn’t need a particular background or job to be able to interpret art. I’m conceptual as an artist, but I communicate in a way people can understand.’

When we first met in February, she told me she felt we were moving towards a precipice, almost irreversibly disconnected – with no empathy for one another, the world or ourselves. In early May, over the phone, she tells me about her new developing body of work. ‘They are different to my other sculptures so they will need a new name. They have a sense of danger but also connectedness.’ The synergy of this latest bout of her creativity awaits us – how will her future creations reflect this strange tangle of emotional upheaval, stillness, community and chaos?