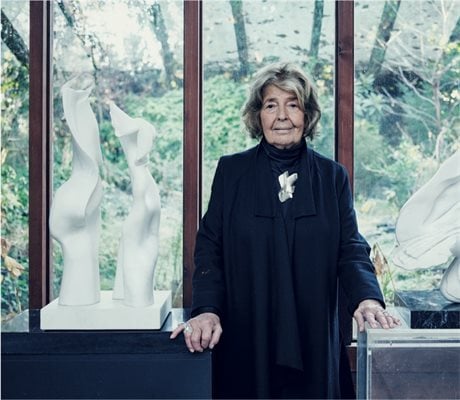 Blumenfeld in her Studio

Helaine Blumenfeld’s abstractions of the human form appear animated, as if by an inner soul. Michael Watts talks to the American-born sculptor about her work and the sacrifices she has made for it

The American sculptor Helaine Blumenfeld, known for her unswerving commitment to public art, lives in Grantchester, a decent punt on the River Cam from the ‘backs’ of Cambridge, where several of her monumental sculptures are displayed. Her largely 18th-century house is hidden by a sprawling, fecund garden and an ancient, towering cedar. Purchased from King’s College in 1970, it is reassuringly bohemian, with six bedrooms reduced to one by a steady invasion of books. The double-height hallway is furnished with art collected on travels in Africa and the South Pacific, where Yorick Blumenfeld, her husband, founded an experimental commune in the early 1960s. There is a dining room, its walls the colour of dried blood, dating from 1490; and her studio occupies a long, narrow, whitewashed space that was once the coalhouse. A great believer in persistence, she comes here early every day and works the clay, losing herself in it. ‘If you always know where you’re going,’ she says, ‘you don’t get there.’

A stroll along the garden’s dark pathways will suddenly reveal a dappled green glade, arranged with various sculptures. A theme emerges. In whatever material she commands (marble, bronze, granite, wood, steel, wax, resin, glass), Blumenfeld’s forms appear as graceful abstractions of natural or human shapes, ‘visions’ that she has been seeing since childhood, she says. Her bronzes, especially, seem ever poised to slip their surly bonds: you glimpse the uprising of a female figure, or of several figures, held in tension. In their unapologetic beauty, their commingling of the sensual and the spiritual, they are clearly a rebuke to brutalism in modern art. She likes to quote the sociologist Adorno, who said that to write poetry after Auschwitz is barbaric. But Blumenfeld, a secular Jew, argues that it is necessary to write a poem after Auschwitz. ‘How else do you deal with the ugliness?’ she asks.

‘Beauty,’ she says, ‘has been ripped from its pedestal, become banal. You say the word and people go, “Ugh!” But the most beautiful paintings and sculptures are all of the Crucifixion, [achieved] through pain and blood and suffering.’ Her views have not made her fashionable with critics. At a symposium in Cambridge’s Fitzwilliam Museum in 2013, she strongly debated whether ‘Beauty is Irrelevant in Public Art’. Her best argument, of course, lies in the regular flow of both public and private commissions she receives, particularly in London – most recently, for example, Fortuna (in Canary Wharf ), Meridiana (Holland Park) and Tempesta (opposite Hyde Park). ‘I’ve always had a lot of people who really believed in my work, who never made claims as to what I should or shouldn’t do,’ she says firmly. In 2013, a million people visited her exhibition at Salisbury Cathedral, which explored the religious affinity of her marbles and bronzes. Although Blumenfeld thinks that religion too often pulls people apart, she is now working on a new sculpture for the Woolf Institute in Cambridge, a body set up to ‘serve the public good’ through interfaith research.

Her career is now in its fifth decade, and she admits that her husband, an expert on utopianism and a former Newsweek bureau chief, has been important in maintaining its equilibrium. His father was Erwin Blumenfeld, a celebrated photographer for Vogue with a stern aesthetic; Erwin’s self-portrait, also painted blood-red, hangs in the dining room.

Her courtship with Yorick was lively. She grew up in Queens, on Jamaica Estates, near Donald Trump, even then ‘a local terror’. Her mother was a painter and Sorbonne intellectual, her non-intellectual father worked in the lumber trade, and his brother, Ben Becker, coached the US boxing team, including Cassius Clay, at the 1960 Olympics. When Yorick first met her, she was studying political philosophy at Columbia and living in Greenwich Village: a high- spirited young woman with black boho clothes and long, flying hair. His mother, a psychoanalyst and handwriting expert, considered her too flighty, so he urged her to send a conciliatory letter. Instead, she had a friend write something in a great scrawl. ‘And his mother said, “I knew this girl was disturbed!”’ She laughs, infectiously, at the memory. They did get married, but not before Helaine had consulted her palmist, Madame Vera, regarding his suitability, ‘because everyone I went out with thought I was wonderful, and he was so critical’. She now credits him with providing the protectiveness she needed, saying, ‘I don’t think I could have become a sculptor without him and his father.’

She gave up philosophy to study sculpture at the Académie de la Grande Chaumière in Paris; sometimes she modelled clay scooped from the banks of the Seine at her kitchen table. For inspiration, she drew on the indelible impression made by examples of early Cycladic art she had seen in Naples. ‘No eyes, no mouth, no back of the head,’ she enthuses. ‘They were hollow, a complete reduction, and they knocked me out.’ She showed bits and pieces of work to her teachers, and eventually was accepted into the Sunday salon of the expatriate Russian cubist Ossip Zadkine, most famous now for his bronze, The Destroyed City, in Rotterdam. His semi-abstract work is an obvious influence, but he was a diffcult man, she recalls, ‘quite small and red-faced, with all this white hair, like a lion. He’d be angry if I left early or dressed up to go and meet Yorick. He’d say, “People will think I have a prostitute here!” And he wasn’t very happy with what I was doing. I would ask him questions and he’d never answer. Every time I did a small clay model, the head would break off, and he never explained to me that the neck dries more quickly and you have to wrap it. He’d just sigh.’

Success and exhibitions followed, however – triumphantly so at New York’s Bonino Gallery in 1971. Soon, she and Yorick had two sons as well. But then, in 1977, came the moment that was to de￿ne her career. Keen to master marble, she left home to live for part of each month in Pietrasanta, a medieval Tuscan town near Carrara’s quarries, made famous by Michelangelo. She knew few people, her Italian was poor, and she was unwelcome in Pietrasanta’s macho society, but nothing would deter her.

At the time, her frequent disappearances went largely unremarked in the Blumenfeld household. Only recently was she made aware of the profound abandonment felt by her children, Remy and Jared. In a new BAFTA television documentary about her life and work, Hard Beauty, Remy confronts her on why she left them, ‘And it just hit me,’ she recalls. ‘I cried. I’d never talked about it before. But I really felt my work needed me to go. And that’s what Pietrasanta is like – a community of ruthless people, pursuing what they see is important for them, and if they don’t, they know they aren’t going to be happy. It’s why so few women are really great as artists – it’s giving that 100 per cent commitment. And I do it when I’m in Italy [where she still lives for much of the year]. What made it so di￿cult is that I was the perfect mother when I came back, so I was even more missed when I was gone.’

Artists as diverse as Henry Moore, Damien Hirst and Gina Lollobrigida, the Italian sex symbol- turned-sculptor, have worked in Pietrasanta. Marc Quinn’s e￿gy of a disabled artist, Alison Lapper Pregnant, which occupied Trafalgar Square’s Fourth Plinth in 2005, was made by local marmistas from his plaster cast. There, Blumenfeld’s mentor, the Argentinian sculptor Alicia Penalba, introduced her to Sem Ghelardini, Pietrasanta’s guiding spirit, whose Studio Sem was moving away from traditional sacred statuary to more avant-garde sculpture. As she learned the basics of carving drapery and delicate rose petals, Ghelardini helped her to give physical shape to her abstract ideas. She began to perfect her precarious technique of thinning the marble to create very fine layers. This produces a striking luminosity, ‘illuminating the form from within’, as though revealing a trapped energy, or fugitive soul, as she describes it. ‘Even on a dark day,’ she says of her marble pieces, ‘the light comes through them.’

In 2007, she became the first woman to win the Premio Pietrasanta e la Versilia nel Mondo, a major award for sculpture; by then, she had already been appointed vice president of the Royal British Society of Sculptors. An OBE followed in 2011, which would have been a damehood, she understands, had she taken up British citizenship, but she patriotically refused. All her life, she says, she has been wary of honours, fame and publicity. She tells a scandalous story of how a PR in New York once promised to get her into gossip columns if she would exploit an infatuated admirer and drive him to suicide: ‘I said, “That’s a very sick joke.” And she said, “No, no, I’m not joking. He’s nearly there anyway.”’

Now, at 74, she is more conscious of her legacy. Abruptly, she left the ‘wonderful’ but old-school Robert Bowman Gallery for Abby Hignell’s vibrant new space in Mayfair. She says she was worried about repeating herself, and of being promoted, wrongly, as the natural heir of Moore and Barbara Hepworth. ‘I wanted to be out there on the street, in the real world,’ she says. ‘I want young people to be affected by what I do, and you can’t do that in a kind of sculptural mausoleum. I don’t think I’ve ever been ambitious for myself, but I’ve been very ambitious for my art, and I’m single-minded about it. There’s a real danger that you get seduced by what you’re doing; it becomes successful, and people like it and want more. But I’m now doing totally different work.’

She is excited by a new series of sculptures she is working on called The Raft – her response to the refugees struggling to cross the Mediterranean, but also to the xenophobia she sees in Britain. A version of The Raft sits in her studio, the clay still rough, her handprints evident; but there’s no mistaking the bodies piled up and pressed against each other, one figure leaning back and almost breaking. ‘There’ll be a tragic element, of course,’ she said, rising from her workbench. ‘But there will be beauty, too.’

The documentary ‘Hard Beauty’, directed by Rupert Edwards, is due to be launched at BAFTA this spring.