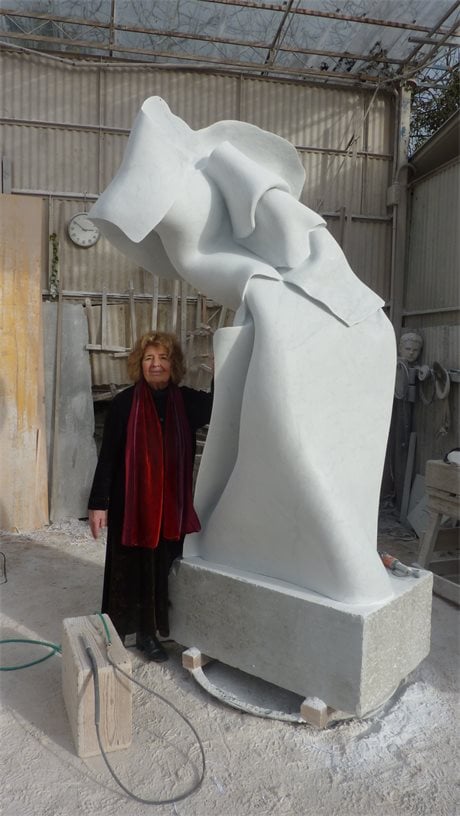 The following is an English translation of an interview which appeared in the April edition of Tendencias del Mercado del Arte, the authoritative magazine for art collectors in Spanish.

Helaine Blumenfeld is one of the major contemporary British sculptors working in marble and bronze. A native of the United States, graduated in philosophy from Columbia University at just 20, after starting artistic training would become the favorite disciple of the sculptor Ossip Zadkine. She has exhibited throughout the world, in 1985 she exhibited beside Henry Moore in the exhibition Dialogue held at the gallery Alex Rosenberg in New York. In 2004 she was elected Vice President of the Royal Society of Sculptors and in 2007 was awarded the International Sculpture Prize Pietrasanta and the Versilia nel mondo. At home with writer Yorick Blumenfeld (son of Erwin Blumenfeld photographer) divides her time between Cambridge and the town of Pietrasanta in Tuscany, the capital of sculpture in Italy, where she collaborates closely with Studio Sem, one of the most prestigious workshops. This month the English artist is the subject of a retrospective at Salisbury Cathedral in 24 bronze and marble pieces. “The impressive architecture of the cathedral and its powerful presence as well as a historical monument to the spiritual sphere makes it an ideal setting for my work,” explains the artist.

You studied Philosophy … How did art come into your life? When did you decide to become an artist?
From the time I was a small child I had felt that language was not able to communicate what was important to me: the world of dreams and fantasy. Discovering Cycladic sculpture in the National Archaeological Museum in Naples, I understood that a language of form was what I had been searching to find. With a minimum of detail a tiny Cycladic head communicated the complexities of the total character of its subject. I suddenly knew I wanted to study sculpture.

What was your first memorable experience with sculpture?
We were living in Paris and I went for the first time to visit the Musée d’Art Moderne, I saw Le cheval by Raymond DuChamp-Villon. I was overwhelmed. It conveyed enormous energy and velocity — I felt its power, but in addition, almost paradoxically there seemed to be a spiritual element as well.

What led you to choose marble and bronze for your works?
I began working in clay, setting myself up in the kitchen of our tiny flat in Paris. I loved the material. It seemed to follow the dictates of my innermost voice. I felt I had been communicating with clay in another life. The very first “sculptures” I created seemed to resonate. They possessed a certainty that I had never experienced with writing. Each piece I created in those early days seemed a miracle — never to be repeated, but to be celebrated!

Just before our first son was due to be born my husband insisted that I choose which sculptures I wanted to have cast and to bring them to Susse Frères (the foundry of Rodin) which was just outside of Paris. I will never forget him telling me when I said I was not sure if I was ready to do that: “Helaine, it is important that you know you are a sculptor before you become a mother.”

It would be eight years later before I began to work in marble. I went to Pietrasanta in search of a bronze foundry and discovered the purity, sensuality and spirituality of marble. It seemed ideally suited to the work I was doing and I began working at the inspirational marble studio of Sem Ghelardini. Sem encouraged and mentored me as I struggled to learn to carve and to survive in what was then a totally male-dominated culture.

You were pupil of sculptor Ossip Zadkine… How was he has a teacher?
Zadkine was fierce, self-absorbed and totally single-minded in his commitment to sculpture. He expected the same from me. He was irritated whenever he sensed that my attention was divided — furious when I left his studio early and pleased when I was so immersed that I lost track of time. He believed in working in a great variety of materials and insisted that I did the same. I learned to model in clay, to carve wood and stone and even to weld. Above all I learned from him what it meant to be an artist.

Do you remember the best advice you ever received from Mr. Zadkine?
Initially every clay model that I made suffered from the same problem: the head fell off. When I asked him what to do he just looked at me and in one of his most exasperating and habitual gestures, shrugged his shoulders. As a result I stopped doing heads all together! (only later realizing that the clay dried too quickly in the neck area and this was the source of the repeated decapitations).

You divide your time between Cambridge and Pietrasanta. Does your experience in both places influence your work?
In the 1970s the conflict that faced me like so many other women was how to balance family and career, my every day and my creative inner world. So initially the decision to work some periods of time in Italy was an attempt to find an equilibrium. Being a very intensely caring mother of two amazing small boys I found it was almost impossible to deal with my desire to be with them and my almost physical need to be alone creating in my studio.

I think by having short periods in Pietrasanta when I could work flat out, isolated, without interruption or competing demands, resolved my dilemma. It allowed me to make a breakthrough in my sculpture and to be a better mother when I returned home. This was only possible because my husband was totally cooperative. As a writer working from home he was able to make this unusual solution possible.

You are married to Yorick Blumenfeld, son of photographer Erwin Blumenfeld… Can you share with us one of your dearest memories of your father-in-law?
My father-in-law had absolutely no use for academia and zero respect for my PhD in Philosophy. He had devoted his life to beauty. He was extremely critical and I was in awe of his judgment on aesthetic values. When he came to visit us in Vienna I was terrified of showing him my studio and hearing his opinion of my work. By then I had completed quite a number of sculptures and had advanced from our kitchen to a wonderful studio. After looking carefully at each piece and saying nothing he rushed out. I was devastated. Some time later he returned with his cameras, lights and a roll of white paper. His desire to photograph my works was a clear indication to me of his enthusiasm and approval. The photos he took that day were amazing and gave me an enduring confidence in my work.

What artists have inspired you especially?
Georgia O’Keeffe’s paintings have deeply affected and profoundly influenced me from the time I was a small girl. I love her paintings: They capture the intensity and brilliance of nature, suggesting transcendence into a realm that lies beyond substance, spiritual and elusive, joyful. Her work is mysterious and visionary. Her work stimulates the viewer to look beyond the parameters, to question what they see.

What connection have you established with the art of the past?
I have an acute sense of the continuity of sculpture throughout the generations and an awareness of earlier traditions which still resonate and provide vital reference points for me. I have been particularly inspired by Cycladic as well as Archaic sculpture as well as Michelangelo, Rodin, Boccioni, Arp, Brancusi, and of course Zadkine. My voice has always come from within, but my deep respect for tradition is evident in every piece I create. The danger for an artist is not that we copy someone we admire but that we copy ourselves.