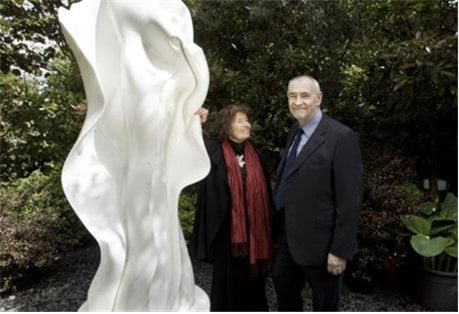 The Independent on Sunday Interviews by Rhiannon Harries

Michael G Wilson 68 has, alongside his half-sister Barbara Broccoli, co-produced the James Bond films since the early 1980s; originally trained as a lawyer, he has written and screenwritten five of the films and had cameo appearances in 14. He lives in north London with his wife.

I can’t remember how long ago it was that I met Helaine. At the time her kids were still living at home. Now her son is a lawyer running part of the US Environmental Protection Agency; how long does a change like that take? About 25 years, I guess.

I have been a photographic collector for a long time, and a dealer suggested that I go to see the collection of photographs owned by Helaine’s husband, Yorick, whose father was the late German photographer Erwin Blumenfeld. So I went up to their house in Cambridge and that was where I saw her sculptures for the first time.

I don’t think I paid too much attention that first time. Then I went back again with a curator from the Getty Museum, again with the photos in mind, and that was when I really looked at her work; Helaine took us on a tour of her studio and talked about what she was working on.

I remember her then as I think of her now – full of enthusiasm and charm. She is amazingly intelligent; she had her PhD by the time she was 20 – ridiculous – but has a depth of feeling as well as that intellect.

Helaine and her husband invited me and my wife to one of their Sunday lunches, which always have a fantastic mix of artists, writers and academics. I’ve sat next to an amazing array of people at their table – the Astronomer Royal, the man who developed the first portable calculator… The mixture of people you meet at their house reflects their endless enthusiasms.

I look forward to Helaine’s company, probably because all those no-no subjects for most social situations – current affairs, politics, religion – are the things she and her husband love to discuss. We may disagree on something, but with Helaine, conversations really are exchanges of opinion, rather than the impassioned mind-dump you get from a lot people.

About 12 years ago I began to collect Helaine’s work in earnest.Although she makes pretty much abstract pieces, she puts a lot of emotion and tactile expression into them. Her work has changed since I’ve known her. It used to be more figurative and it went through this period of gestation and she became more confident about expressing this abstract emotion in her. Knowing the artist helps you appreciate the work; seeing the passion they put into it and the emotions they are wrestling with.

Helaine Blumenfeld 68 is a sculptor and vice-president of the Royal British Society of Sculptors. The first woman to win the international sculpture prize Premio Pietrasanta nel Mondo, her work has been exhibited alongside Henry Moore and Constantin Brancusi. She lives in Cambridge and Italy with her husband, the writer Yorick Blumenfeld

It was about 1982 when I was asked by a friend if he could bring someone to look at the pictures we have by my husband’s father. From the moment Michael came into our hall, I was struck by his intensity of focus; he has a way of looking at something that seems to absorb it. He seemed scholarly, so I thought he must be a curator, but on the other hand, he was so appreciative of what he was looking at. And the most amazing thing for me was that his focus was on my sculpture.

Our friendship was enormously encouraged by the fact that the next time we saw him, he was with his wife Jane. The unusual thing about my friendship with Michael is that we never talk about really personal things. Through 27 years, we’ve always focused on issues and never got pulled down into what you did yesterday or what your children are doing. With Jane, I have the other side of friendship – the sweetness and the sharing of details.

I was amazed when I found out what Michael did for a living, not least of all because there is no arrogance. Bond became a big part of our lives. My kids loved going on the sets when each movie was made – we started when Sean Connery was still Bond. Seeing Michael working on films in such detail, I began to understand why he looks at things in the way he does.

For me, one of the most important discussions we had was about taking risks. It was a moment in his career when he was thinking about getting a new Bond and whether there could be someone as good as Piers [Brosnan] and if people would accept something different. We talked for hours about the importance of taking risks, on a personal and artistic level.

I have formed close friendships with other collectors of my work, but not in the same way. With almost all of the others, the friendship is based on them owning work that already exists. I wouldn’t say Michael is my muse, but when I began doing my new pieces I knew he’d be pleased, as I was doing what he had been saying he would love to see me do: to let go more.

Whenever they come to our house, it’s a treat and I love going to theirs – Michael is always relaxed and laughing. We celebrate New Year’s and birthdays together and our children are friends. The Wilsons feel like part of our extended family.