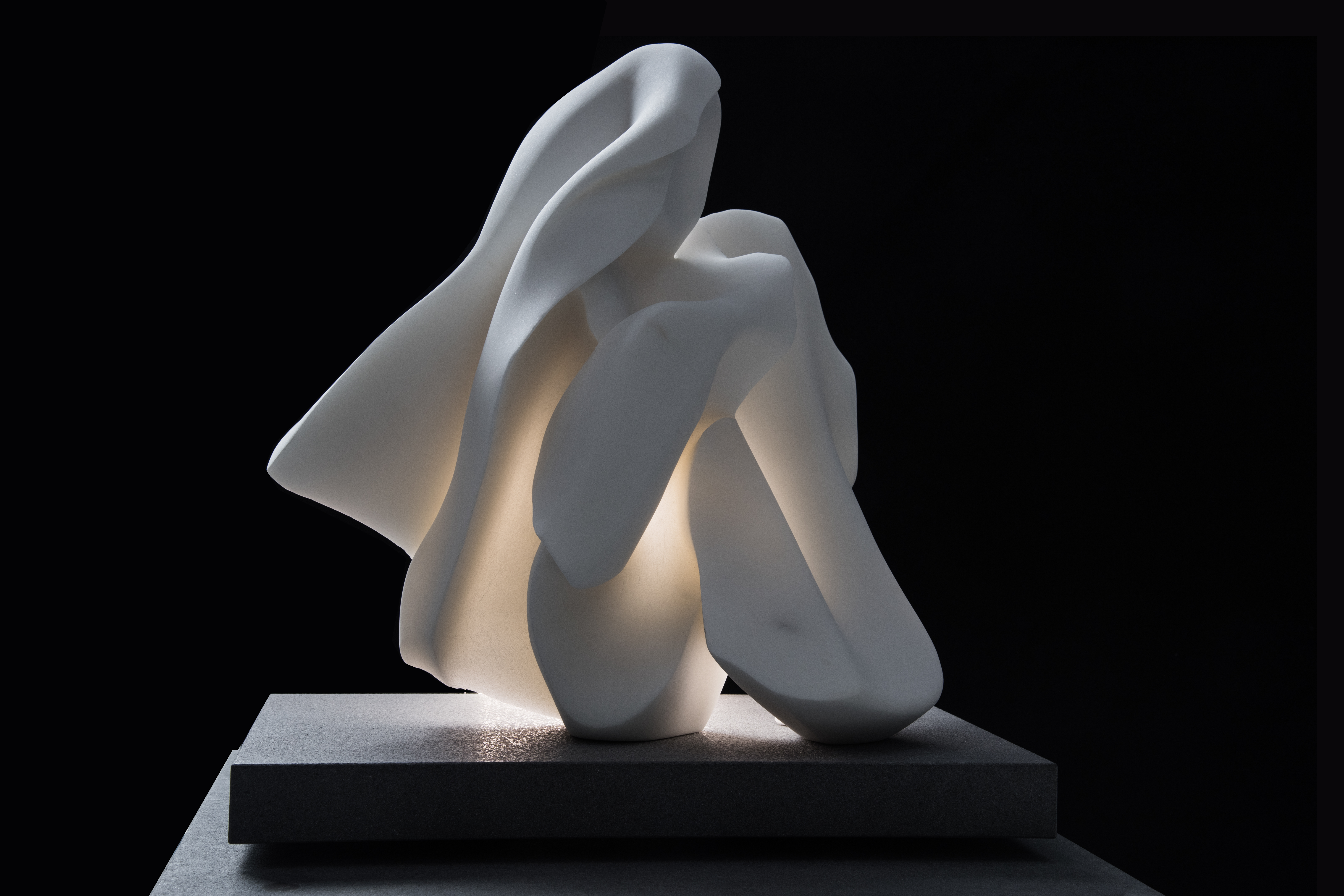 Read the original article on Meer

Helaine Blumenfeld is a sculptor who is driven and single-minded in her pursuit of raw creative expression. Her purpose is to create sculptures that explore the human spirit. While many of us found the isolation of lockdown daunting, for Blumenfeld, the time alone in her studio has produced ethereal new works which are portals to other dimensions, other states of being.

In this latest exhibition titled ‘Intimacy and Isolation,’ at Hignell Gallery in Mayfair, Helaine Blumenfeld reveals her anxiety as well as hope for the times in which we live. The exhibition features more than twenty sculptures, including new works conceived during lockdown and created in marble in 2022.

“Emerging from the isolation of lockdown I feel a new energy in approaching my work,” says Blumenfeld. “As I became immersed in carving my new models, I had a kind of epiphany, I arrived at another level of understanding. Whether the model was vertical, round, or in several parts, it was describing the light that illuminates and defines us as individuals and as communities. Each sculpture explores the light that is projected by our inner spirit, the light that gives our life meaning, and when shared, can inspire and illuminate those around us.”

In her early years as an artist, Blumenfeld explored intimacy as the profound knowledge of oneself, translating this into individual, abstract sculptural forms. The theme was gradually extended to reflect powerful subject matter involving the wider world.

Blumenfeld’s works approach intimacy through notions of introspection, closeness, dependence and independence, seen in pieces such as Shadow Figures (2012) and Souls (2001). This dynamic further developed and expanded in more recent pieces in both bronze and marble such as Exodus V (2019) and Exodus VI (2020). These latest works go beyond the exploration of personal relationships to considering the relationships within and between societies. Blumenfeld further pursues this through maquettes for large-scale works such as Taking Risks (2020). The monumental version of this sculpture is currently on view at Canary Wharf in an outdoor exhibition which includes eleven of her monumental sculptures.

Throughout the past five decades, intimacy has expanded to include isolation. Going beyond the level of personal relationships to exploring our place in the world, her sculpture has become rooted in an interest in what it means to be connected and to share perspectives. With Intimacy on the Edge (2019) and Intimacy and Isolation (2019), the artist comments on the lack of intimacy that exists globally, despite the increasing interconnectivity though technology.

Blumenfeld said, “Although society through technology appears to be increasingly connected, intimacy is lacking on a global level. We need to have a profound knowledge of each other and an increased sense of community. Loneliness and anxiety are on the rise. We need to be able to empathise with one another in order to connect on a human scale. Engaging with art can help us to do this.”

In Hard Beauty, the 2018 Sky-Arts film about Blumenfeld, Timothy Potts, (Director of Getty Museum) says: “many artists have successful mid-life careers, but their future doesn’t always look as exciting as what’s come before them. Helaine has avoided that pitfall by continuing to evolve in her artistry; what she’s creating now is more ambitious and complex than ever before. I am sure that Helaine’s work will survive the test of time and she will have a place in 20th and 21st century history.”

Helaine Blumenfeld OBE grew up in New York and graduated from the University of Michigan. She studied Moral Philosophy at Columbia University, receiving a PhD in 1964. She married her husband Yorick in 1963 and moved to Paris where she studied sculpture with Ossip Zadkine. She had her first solo exhibition in 1966 in Palais Palffy, Vienna. There follows an impressively long list of exhibitions in Britain, Europe, Scandinavia, China, Korea, Singapore and the United States. The most notable recent exhibitions include: Ely Cathedral, Pilane Sculpture Park, Huygens’ Hofwijck Museum in the Netherlands and the largest show of her work to date at Canary Wharf (2020).

Best known for her monumental public commissions, Blumenfeld is passionate about bringing sculpture into the public domain, creating works that have become integral to the cultural landscape of the UK. Most notably, Tempesta overlooking Hyde Park in London, installed in 2012 as well as Fortuna (2016) and Metamorphosis (2019) in Canary Wharf and Tree of Life: Encounter installed at the Woolf Institute (Cambridge) in 2018. Blumenfeld’s work represents some of the most definitive examples of public sculpture in the UK. Blumenfeld spends her time working in her studios in Pietrasanta (Italy) and in Grantchester, Cambridge.

Intimacy And Isolation, is open to the public from 26 April – 24 July 2022 at the Hignell Gallery, Shepherds Street, Mayfair, London.