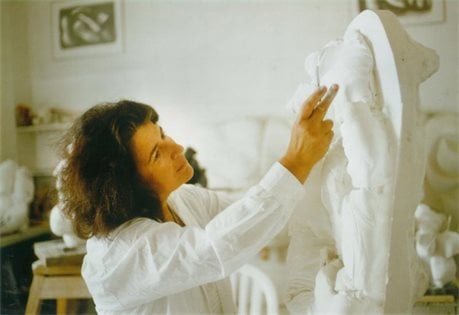 Sexy is an overused word in the arts but it’s an adjective you can’t help applying to some of Helaine Blumenfeld’s voluptuous marble sculptures as you run your fingers over their surfaces. These abstract bodily forms, often in the purest icing-white crystalline stone, are so tempting that you almost want to lick them. Licking is not actively encouraged but Blumenfeld is very keen that you touch and feel the surface of the work. It’s a transgression of art world conventions that’s typical of this sculptor, who has never had much to do with the contemporary art world… and which maybe explains why she is probably Britain’s most successful sculptor you’ve never heard of.

I’ve been lucky enough to have known Blumenfeld’s work since I was a teenager when I visited her house and was captivated by these large, strange, organic forms. However, as a 15-year-old, I confess my wonder was cut with a certain dose of bafflement: what did these beautiful objects actually mean? So when I was asked to make a film about Blumenfeld, I had no compunction about taking the commission from Sky Arts. Here finally was a chance to answer my adolescent ignorance.

Blumenfeld, now well past 70, is a compelling figure, a benign otherworldly empress, engrossed in in her work, often on a mammoth scale, much of which emanates from her dreams, which she channels during late-night sessions in her studio. What’s more the majority of her sculptures, some carved in marble and others forged in bronze, are made with the help of a team of Italian artisans in the ancient Tuscan sculpture town of Pietrasanta. The marbles are made using carving techniques little changed since the time of Michelangelo. (Pictured right: Spirit of Life, Newport, 2005)

Visiting Blumenfeld in one of her studios, where she works surrounded by an army of clay models, small and large in different stages of development, you can’t help but be engrossed by her process. We quickly realised that, however much it might test our budget, we needed to try and follow a sculpture from conception as a piece of clay, squeezed into shape in the middle of the night, through to its public unveiling as a giant marble – a journey that typically takes at least a year. Among the filming highlights, Blumenfeld took us to the quarry at the summit of Monte Altissimo in the Apuan Alps, a celestial blinding-white landscape where you can find at least seven or eight types of marble including the rare and highly prized “statuario”, the sparkling white stone favoured by the Greeks and Romans for their effigies of gods and emperors. Gazing at the contours of the rockface, Blumenfeld purrs, “I don’t come here to choose the marble, I come here to be romanced by the marble.”

From the outset we wanted to try to convey on screen what it feels like to walk up to the sculptures in real life. As Dr Timothy Potts, director of the J Paul Getty museum in Los Angeles, describes them, “You can’t help thinking, what is this thing? Is it alive? What sort of life does it have? What sort of spirit does it have?” In my head I toyed with the idea of trying to shoot the documentary in 3D. But we quickly realised we would need to add several noughts to our budget. Instead I turned to my regular collaborator, cameraman Will Edwards (no relation), who spends much of his working life filming the natural world – active volcanoes, storms in the Arctic, climbing Everest. Will relished the challenge of bringing Blumenfeld’s organic forms to life on the screen and set to work looking for ways that reveal the sculpture’s animate nature.

These days Blumenfeld lets her Italian artisan colleagues deal with much of the bone-jarring business of chiselling the marble, but she’s still working harder than ever. As a woman in a man’s world – and Pietrasanta in the 1970s was certainly that – she’s always felt a need to prove herself, to work harder than everyone else. It was a commitment that pushed her to live a kind of double life: “Helaine”, to her writer husband and children in Cambridge (Blumenfeld pictured above in her studio), and “Elena” to her sculptor friends and collaborators in the marble dust-filled workshops and foundries in Italy. It’s only in recent years that she has allowed these two worlds to meet. In the film her son Jared reveals that he was 45 before his first visit to Pietrasanta.

During a filmmaking process that’s taken the best part of two years, was I able to answer my teenage confusion – can I now tell you what Blumenfeld’s work means? Well, yes and no! What I discovered is that this is an artist who invites us to meet her work and see what happens. You should try it.

Hard Beauty: Helaine Blumenfeld is on Sky Arts on 18 April at 10pm