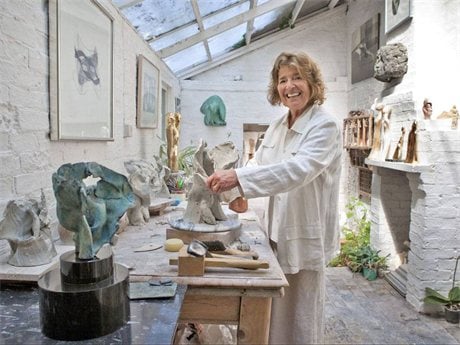 Rock star: Helaine Blumenfeld in her studio in Grantchester

Helaine Blumenfeld: ‘Art is a commitment to risk, a reflection of life – nothing stays the same’

“Fearless” seems an odd description for Helaine Blumenfeld, an artist who makes unabashedly beautiful sculptures, but in a moment when beauty and spirituality are considered pejorative descriptions for artworks, it takes a courageous artist, particularly a woman, to persevere.

Blumenfeld began studying sculpture after a successful academic career, receiving her PhD at Columbia University in 1964. Still only in her early twenties, she moved to Paris, apprenticing herself to cubist sculptor Ossip Zadkine. She laughs and says, “Zadkine’s process was obsession. He was not interested in anything else.”

Moving to Italy, she apprenticed herself to an elderly artisan who solely made roses out of marble and taught her how to open up stone in petal-like layers, something she continues to explore in her work.

Like many other stone carvers, she is obsessed by the material but aware of its difficult properties, and over the years, has taken increasing risks, her work becoming freer and more unfinished. “Tempesta”, her work recently unveiled beside Hyde Park, began as a 43-tonne block before being reduced to its current featherweight seven tonnes. She chose to work in the hardest marble from Carrara, selected from a special quarry, which proved to be so hard it took four times longer than usual to polish.

It is impossible to separate Blumenfeld the artist from her family, who realised early on they had to permit her the divided loyalties that allowed her the freedom to work.

Blumenfeld lives and works in Grantchester, near Cambridge, and Pietrasanta, near Pisa, Italy. With her husband Yorick, son of photographer Erwin Blumenfeld, she has two grown sons, Remy and Jared. Surrounded by academics, life in Grantchester is always interesting. Pietrasanta, home to both Michelangelo and the quarry for his “David”, continues to be a magnet for sculptors, with its unique workshops and artisans.

In 2007, Pietrasanta awarded her the Premio Pietrasanta e la Versilia nel Mondo; she was the first female recipient. Her “reward” was a show, which opened last autumn, in the beautiful piazza and church of Pietrasanta. At the opening, the mayor of Pietrasanta made a touching speech about the town’s respected resident. In the audience were family and friends from Cambridge.

“Art is a commitment to risk,” Blumenfeld says. “Art is a reflection of life – nothing ever stays the same.”