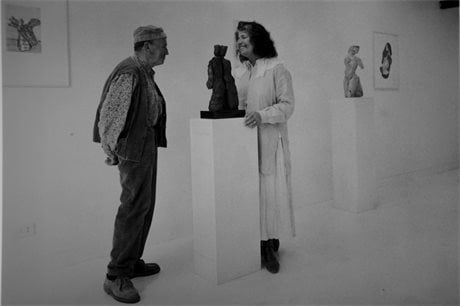 Helaine Blumenfeld with Sem Ghelardini in Italy in 1994, 20 years after they first met

The Telegraph Interview by Tina Nandha

EVEN BEFORE I MET Sem, I had heard about him from sculptors who worked in Pietrasanta, in northern Tuscany; he was a legend. At 15 he was a leader in the partisan movement in the region during the Second World War – so wily and intelligent – working with Americans who dropped off money to fund them. Then in the 1950s he opened a marble studio in Pietrasanta. This photograph, taken at an exhibition of mine in a small gallery there, recalls not only our relationship but a change that came about in my life because of him.

The piece we are looking at, Psyche, I went on to do three metres high – these are initial models. Sem was quite close to the end of his life [he died in 1997]. He said that when he first saw my work, he knew I had something new to say; he wanted to tell me his belief in me had been fulfilled.

We met 20 years earlier, in 1974, when I went to Pietrasanta for the first time to look at the bronze foundries. I was already quite successful, mostly working in clay and casting in bronze. I had done a little bit of marble carving – enough to see that it was really difficult – but when the sculptor Alicia Penalba saw my work, she said, ‘You’ve got to meet Sem, this should be in marble.’ So I was brought to the bar where he held court, drinking grappa.

He was so charismatic. I immediately thought about Picasso because he had that same vitality. When he saw my models he was excited. He took me up to the quarries in Carrara and Pietrasanta – places of magic, serenity and beauty – and I knew I wanted to work in marble, though it would be rigorous. I’d always thought my work was spiritual; the white marble and the ability to have it become translucent seemed the way to realise my vision.

On that visit, Sem gave me a blank cheque, which I still have. He said, ‘If you ever need money, I want you to use this.’

Back in England, my husband, a writer who worked from home, encouraged me to start going to learn from artisans at Sem’s studio in Pietrasanta. At that time, women weren’t married and didn’t have children if they pursued this kind of career. My solution was to divide my life – I worked flat-out in Italy for two weeks at a time, and when I was home, I was a better mother to our two little boys than I had been before I left.

In the marble yard I was the only woman, with a group of tough men. It was very hard. But it was a relief to find a community where everybody was committed to their art. Pietrasanta is also where I first met Henry Moore, in the 1970s. Sem was making big pieces for him and he came to supervise. Later, in 1985, Moore and I had a joint show in New York. When the dealer Alex Rosenberg first told me he wanted to exhibit me with another artist, I said, ‘I prefer to have my work shown on its own.’ He replied, ‘Maybe you won’t feel that way when I say who the other person is.’

Sem argued that experimenting should take precedence over exhibiting, and said the most important thing for an artist is to develop their own voice. That is advice I’ve followed ever since.

A major exhibition by Helaine Blumenfeld OBE is at Ely Cathedral, Cambridgeshire, until 28 October

‘In the marble yard I was the only woman, with a group of tough men. It was very hard’