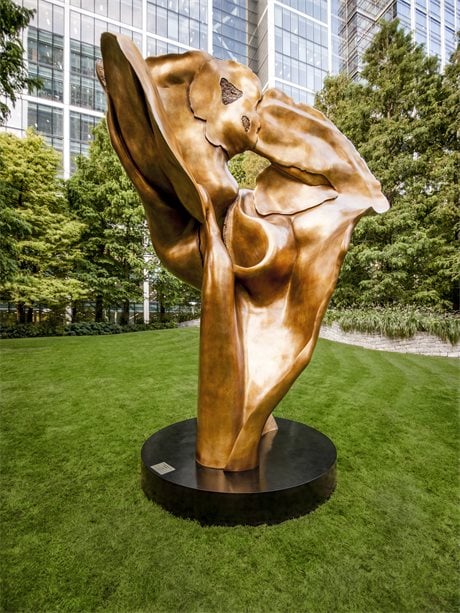 With a brand new sculpture in Jubilee Park, a major solo exhibition, and a BBC documentary set to air next year, sculptor Helaine Blumenfeld OBE is one of the most accomplished female sculptors of our time. She talks artistic dynasties and breaking the mould with Kari Colmans.

Having so far managed to fly relatively low under the radar when it comes to her personal profile, contemporary sculptor Helaine Blumenfeld OBE will be “taking some risks” this year. One of the most accomplished and respected figures working in sculpture today, her work has been shown in more than 70 exhibitions and she has completed more than 80 commissions worldwide over the past four decades.

“I’m not a public artist,” says Blumenfeld, who has just got back from Italy, where she’s been putting the final touches to her latest public sculpture ahead of its reveal. “Despite my family name [she is married to the writer Yorick and is the daughter-in-law of legendary fashion photographer Erwin], I live my life quite privately. Now that I’m in my 70s I’m taking more risks. I’ve broken my own rules; I’m thinking about my legacy.”

Appointed vice president of the Royal British Society of Sculptors in 2004, she became the first female sculptor to win the International Sculpture Prize in Tuscany’s Pietrasanta (the Mecca of sculptors) in 2007, which was followed by a nod from the Queen in 2011 (“a huge vote of confidence”). And this month, at the age of 74, she has chosen Canary Wharf to stage her largest public sculpture to date, as well as holding a major solo exhibition in Mayfair, and waving goodbye to the film crew who have been tailing her for the past few months for a BBC documentary about her journey.

With her large-scale, abstract, cast-bronze piece Fortuna standing at more than five metres high in Jubilee Park, Blumenfeld feels elated. “For me, public sculpture is so important as it affects a large number of people. As an area in which to exhibit one of my sculptures, Canary Wharf was very high on my list,” she says. “The new residential building in Jubilee Park will have a large public presence right on the wharf. There was a time when sculptures were commemorative or religious, but today they define an area and create a place of meaning within a community. Canary Wharf is one of the most vibrant, energetic and lively hubs in the world.”

We speak for a while about the piece and its message, but ultimately Blumenfeld hopes Fortuna will convey an expression of hope and aspiration, of “rising upward”. “I wanted to mediate with the vastness of the architecture,” she says. “I was inspired by the idea of fortune. Although the surface may seem polished, there is a lot of energy underneath. Growth is not always an easy path. My work represents an expression of the human condition: hope, fragility, turbulence, strength and beauty.”

Fans can also explore Blumenfeld’s latest exhibition this month at the newly opened sculpture space Hignell Gallery. Gallery owner Abby Hignell has worked with Blumenfeld on and off for the past ten years, most recently curating Helaine Blumenfeld / Henry Moore: A Dialogue 1985-2015, which celebrated the 30th anniversary of the two sculptors’ famous, seminal joint exhibition at the Alex Rosenberg Gallery in New York. Now curating her latest body of work, Hard Beauty, she believes the themes are multi-layered. “Blumenfeld is a passionate believer in the importance of the positive power of beauty and the difference it can make to peoples’ lives,” says Hignell. “But risk is an essential part of her creative process. Through embracing risk, Blumenfeld shows vulnerability, which becomes a counterpoint and an edge to the intrinsic beauty in her sculptural forms. Helaine Blumenfeld is the grande dame of contemporary marble carving… she is a true pioneer.”

When I mention the accolades, Blumenfeld acknowledges her gratitude, but maintains that her public sculptures will always represent the highest points of her career. But no prize or title has held as much esteem as the feedback from her first ever critic, her late father-in-law Erwin Blumenfeld, who also took the first photographs of her work in 1966. “He didn’t take me seriously at first,” Blumenfeld recalls fondly. “He teased me about being a child prodigy because I had a doctorate. While he was extremely educated, he was self-taught, and he had no respect for academia. At first I didn’t want him to see my work because I was so scared that he would hate it and wouldn’t hold back in saying so, but he insisted. At the time, we lived in an old palace in Vienna, and when he came in he didn’t say a word. He just looked from one piece to another and walked out again. I was in tears. But half an hour later he came back with a camera and a roll of paper and shot for four hours.”

Today, the great photographer Erwin’s name is synonymous with vintage, glossy fashion shots from Vogue and Harper’s Bazaar (he shot more Vogue covers than anyone in history), as well as some of the most iconic portraits of Audrey Hepburn and Grace Kelly. However, his early self-portraits were often distorted and disturbing, playing with his so-called fetish for beauty and women, and his lifelong fascination with the self. “He believed in beauty,” says Blumenfeld.

“Everything he did influenced me, especially his use of distortion and abstraction. One of his most famous pieces, Nude Under Wet Silk, had a huge influence on me. Having him believe in my sculptures was a greater prize than any I have won since. He never said anything he didn’t believe in.”

Both artists cited one another as an influence, their subjects and themes of beauty, light and the female form regularly overlapping. While Erwin manipulated exposures and film, Helaine brings light into her work “as a fourth dimension”, a visual metaphor for transparency, which she sees as “the essence of relationships”. Neither shied away from celebrating beauty for beauty’s sake. Coincidentally, London’s Osborne Samuel gallery will also b-e celebrating a Blumenfeld legacy this month, with its Erwin Blumenfeld: From Dada to Vogue exhibition.

Blumenfeld is a strong believer in sculptures belonging in public spaces and she has worked throughout her career to bring art out of galleries and into communities. “A great many artists get either comfortable or nostalgic in their visual language as they get older, whereas Blumenfeld is still pushing her own boundaries and challenging herself,” says Hignell. “In her own words: ‘The danger is not that I copy others but that I copy myself… There is no growth without change.’ She is an inspiration.”