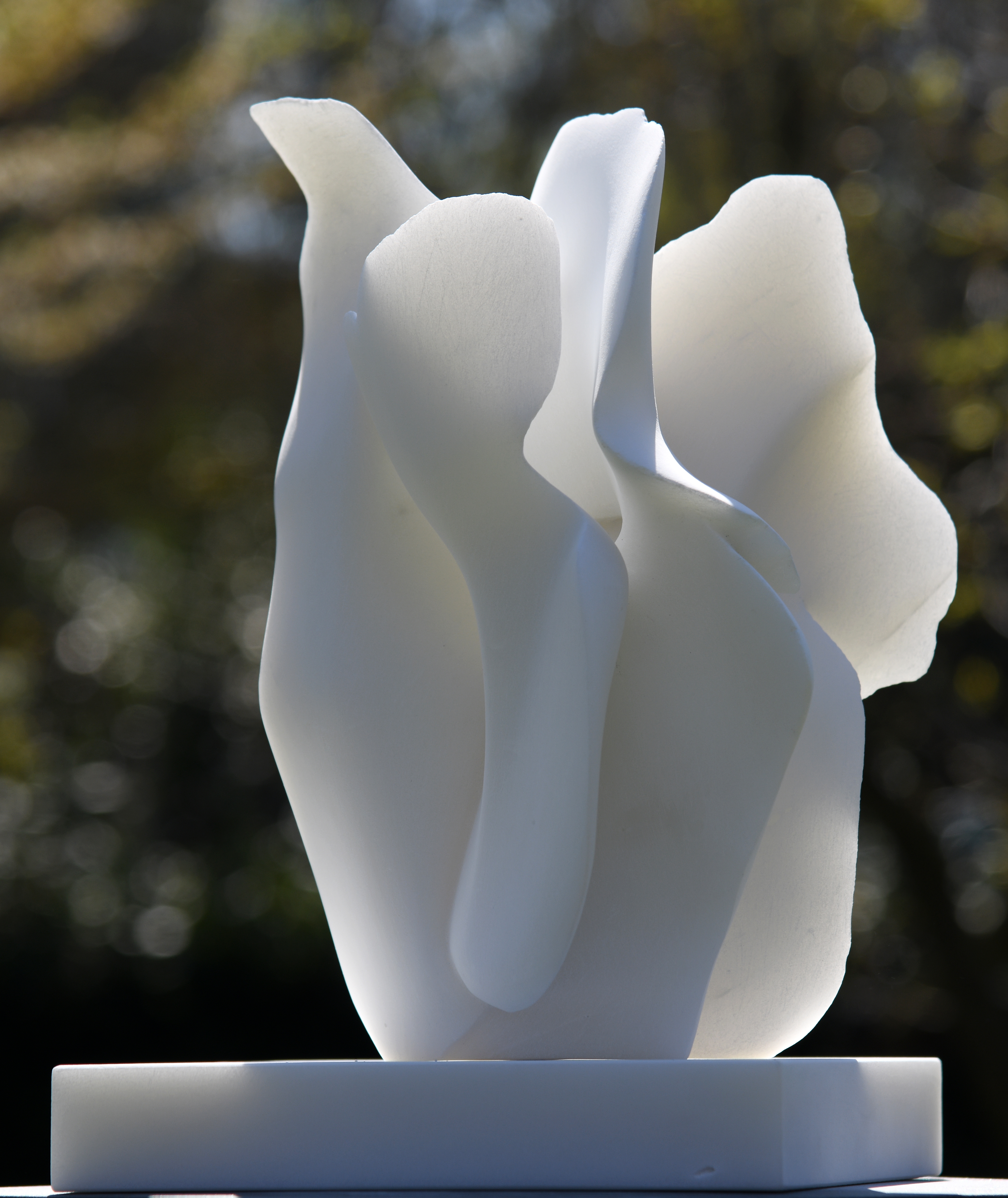 Esteemed sculptor Helaine Blumenfeld has a new exhibition of both new and earlier works which focus both on her anxiety and her hope for the times in which we live. Mostly conceived in lockdown and created in 2022, these new, small-scale abstract sculptures are the result of an extended sculptural vocabulary and approach intimacy both as a personal as well as a global phenomenon.

At the height of the pandemic, Helaine Blumenfeld recalled a time when, as a young girl, she visited her uncle’s campsite. One evening, during a large meeting, it suddenly became dark and everyone was issued with a candle and a match. “We discovered that by everybody lighting that little candle, we were sitting in a floodlight and I think somehow that message might have got lost.”

The recollection represented something of an epiphany. Stripped, by virtue of pandemic lockdowns, of deadlines, commitments and the ability to travel between her studios in Cambridge and Pietrasanta in Italy, Blumenfeld embarked on a sustained period of creativity, remarkable for someone now in their 80s. The fruit of it can be seen in more than 20 new and recent works in her latest show, Intimacy and Isolation at London’s Hignell Gallery.

The message is about discovering the light within us, the light she believes each of us has that defines us as individuals and communities. Yet that light needs to be developed in order to illuminate others. The idea is expressed beautifully in the eponymous work The Light Within: Intimacy and Isolation (above) in which Blumenfeld has carved the two marble elements so thinly so as to render them translucent, making the light appear to emanate from both without and within.

Helaine Blumenfeld has long used her sculptures to express deeply held convictions born from soul searching. In previous works she has visualised her concern at the direction society is taking – that despite technology making us more connected, we have become lonelier, more impersonal and more anxious. Isolation rather than empathy is the end result of our digital world. Sliding towards a precipice is how she has put it.

Nevertheless, there is hope and now her theme of intimacy has extended to the wider world, beyond the exploration of personal relationships to consider the relationships within and between societies. She expresses the need for greater knowledge and an increased sense of community. “It means changing your perspective so that you can begin to understand where someone else is coming from,” she tells me. “And that means shedding a light on who they are.”

Her theme is expressed through several media – marble, bronze, wood and terracotta – and each with their hints of the human form, some simple, some elaborate but all exploring the light that gives our life meaning.

Sometimes she might give a bronze work a rough texture with the familiar blue-green patina that suggests abrasion and conflict, as with Explosion (above) or the idea of reconciliation and resolution in the cedar wood sculpture Together After the Storm (also above), with its pronounced grain.

There is a tension between the sharp edges and the smoothness of form, echoing the uneasy atmosphere that increasing isolation brings, yet as with all her work, there is a tactility and a graceful elegance that offers hope and draws you in. Through their layers, folds, shapes, perspectives and textures, these table-top, intimate sculptures represent so much of the human condition.

She pursues her theme also through maquettes for large-scale works such as Taking Risks (2020), Metamorphosis (2018) and Fortuna (2016) which form part of the Looking Up series on view at London’s Canary Wharf.

Helaine Blumenfeld has more than 90 monumental sculptures to her name in private collections and public spaces worldwide and is one of the leading sculptors in the UK. Intimacy and Isolation is a chance to see small-scale artworks that both raise questions and raise the spirit in the way that good art can do.

Intimacy and Isolation is showing at the Hignell Gallery, London  until 31 July 2022