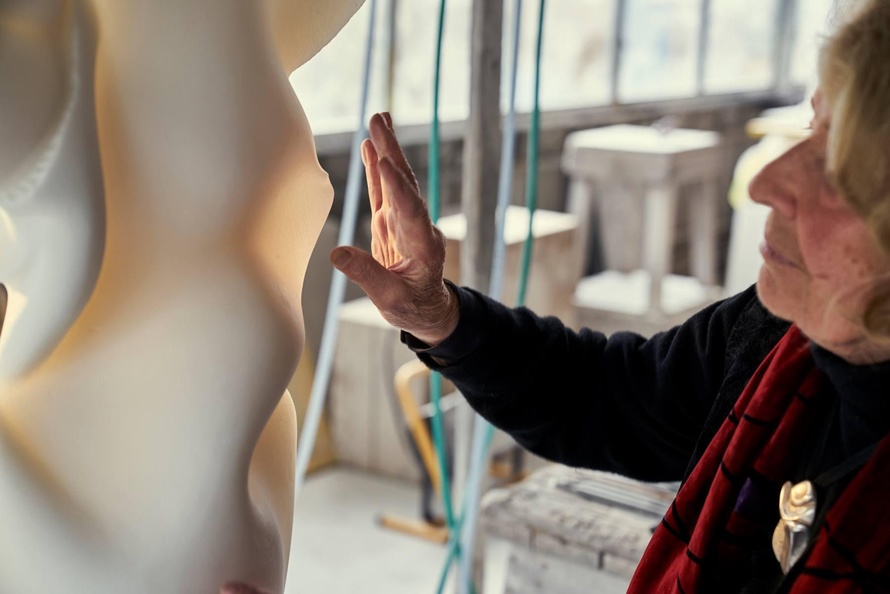 There’s a magical zone between figurative and abstract that 77-year-old sculptor Helaine Blumenfeld plays with. Could that creamy crease suggest the elegantly clasped fingers of a hand or the wing of an angel?

For the past five decades Blumenfeld has worked primarily in bronze and marble, as she puts it, to communicate her fantastic dreams. Known for large-scale public sculptures, examples of her work are in the collections of Clare College, Cambridge; the Courtauld Gallery; the Smithsonian; and the Tate.

She takes commissions for private clients, such as that created recently for the Knightsbridge apartment of a client of interior design firm Elicyon. Charu Ghandi, the firm’s founder and director, says her client was mesmerised by the power and fluidity of the Angel at the Hignell Gallery in Mayfair, and commissioned a pair of matching sculptures for the entrance of his flat.

“We had charted the journey of Helaine’s Angel since its commissioning, I was so thrilled with how the pair finally looked in situ, as if the space had been entirely created for them,” says Ghandi. “The leather wrapped curved walls, the marble floor and the angels standing proudly on either side enveloping you into the apartment. It was special to be with the client when he first saw them. His reaction was profoundly simple, cloaked in delight, he said ‘they are so beautiful, they were always meant to be here’.” 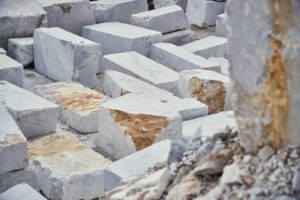 Billionaire sat down with Helaine Blumenfeld to talk through her life’s work.

It’s been an incredible year for you, what with the Venice Biennale, Ely Cathedral and a film on Sky Arts. Why now, in your mid-70s, are you choosing to embark on one of the most ambitious periods of your career?

The past few years have been amazing for me. It has not been a question of me choosing to embark on an ambitious schedule but rather trying to decide which possibilities I want to pursue. Earlier in my career I kept away from publicity, feeling that developing a body of work was the most important goal. In the past few years I feel that I want to leave a legacy. It’s important to have my sculpture reach people. To achieve that, I’ve made a conscious effort to make myself more available for public events and more accessible to the press.

What’s in the pipeline for next year, off the back of this momentum?

I have made a decisive effort to create more public sculpture. I’ve been doing commissioned work for clients in the Middle East and China. Next year, I will have a major exhibition of my work at the Pilane Sculpture Park in Sweden. I will also have a very important commissioned sculpture installed at Wood Wharf in Canary Wharf, which will be accompanied by a major exhibition in Canada Square. A number of my sculptures will be installed in Nanjing, China, and I am planning to exhibit in the US.

As a sculptor working in Pietrasanta, where Michelangelo, Moore and Botero sourced marble, do you feel the weight of the centuries of other artists and a certain sense of responsibility with what you create?

Working in Pietrasanta is incredibly inspiring but also liberating. Apart from being so important historically, its location is particularly impressive with the marble quarries in full sight. Everyone in the town is involved either in making sculptures or enabling sculpture to be made. It is easy to be single-minded without feeling apologetic.

Why do you do what you do?

Trying to describe my dreams as a child, I continually found that language failed me. It was only when I was in the National Museum of Naples looking at early Cycladic sculptures that I realised that the language I had been searching was to be found in the forms of sculpture, not in words. It was an almost instantaneous discovery. I spent the next years in Paris becoming a sculptor and learning to translate my dreams into sculptures.

What are the biggest challenges in a hugely laborious process?

The biggest challenges are not technical but conceptual. The process of developing an initial model is largely intuitive. However, moving from the small model to creating an enlarged model for the final commission is a process that is mainly rational. Trying to maintain the freshness and excitement of the initial study when creating a full-scale work is always the greatest challenge. 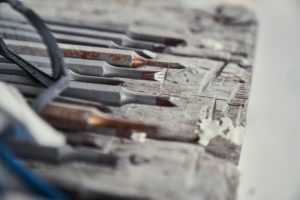 How long can one large sculpture take, from conception to delivery?

A single large-scale work can take up to five years from the initial small model to the completed work in marble or bronze. The monumental sculpture I am now working on for Canary Wharf, Metamorphosis, began with a maquette four years ago. Since the time I created the initial model, it has gone through several stages of enlargement and during the past two years I have been working with the foundry Pangolin Editions to create the full-scale sculpture in bronze — nearly 4m high. I am planning to install it in the spring of 2019.

What do you look for in the perfect block of marble?

This depends very much on what I want to use the block of marble for. Sometimes I’m looking for purity, compactness, strength and whiteness. At other times, I look for subtle veining. Most often, translucency is the quality I want.

What has been your proudest moment?

The opening of my exhibition at Ely Cathedral in July of this year was one of my proudest moments to date. Exhibiting my sculptures in such an incredibly beautiful, spiritual setting, I was elated by the feeling that they enhanced the cathedral rather than diminish it. I was particularly proud that the first woman bishop of London, Sarah Mullally, opened the exhibition and that my whole family was there to share the experience.

What inspires your sculpture and how has that evolved over the years?

I’ve spent most of my career expressing very personal feelings through my sculpture: love, hope and despair. More recently, my work has been driven by a need to respond to developments in the wider world. The state the world is in — political chaos, lack of leadership, divisions and suffering — has increasingly been a focus for the sculptures I have been creating. Now, for the first time, I am showing works that reflect and address the disruption we see around us.

If you weren’t a sculptor what would you be doing and why?

I cannot imagine doing anything else. The journey to discover a language capable of communicating the mysteries that lie beyond spoken words now defines me. For me, creating forms is like breathing.