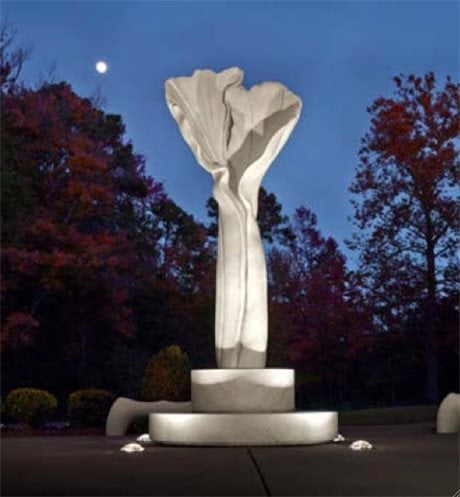 What better symbol is there for a business park than two fantastic hands coming together in a handshake? Nearby, a giant gear, precise and polished but with an intriguing twist, marks the turn into an industrial area. Over on the river, a dreamy marble beauty gazes out from her perch in a peaceful pond. In front of a library, a bronze figure tells a story about being ready for life’s chang- es, as he balances atop a sphere that’s ready to roll. To get to the airport, turn at the soaring metal abstraction, a geometry puzzle built around a beam of light.

Newport News was introduced to outdoor sculpture in the 1930s by the Huntingtons — Archer and Anna Hyatt — who founded The Mariners’ Museum and imagined its 500-plus-acre surroundings as a sculpture park. They installed several pieces by Anna, a well-known sculptor, but the Depression hit before they could make their ambitious dream a reality.

Six decades later, local developer Bobby Freeman had a dream of his own: a midtown community with squares and roundabouts designed for sculpture. The happy result, Port Warwick, impressed local leaders so much they wanted other parts of the city to enjoy great art, too. They turned to Freeman and, after confirming that major players — in business, education, health, culture, and city government — were on board, he formed the Newport News Public Art Foundation (nnpublicart.org).

Since 2001, the volunteer-led non-profit has been bringing the best sculpture from around the world to Newport News, with 17 pieces installed and another half dozen in the works. The collection is diverse, with pieces that are traditional and modern, figurative, and abstract, beautiful and, yes, sometimes challenging. So are the artists, who come from the local area and the other side of the globe, from the United States, Europe, South America, and Asia.

The key word here is “bringing.” In most communities, only a small proportion of residents visit art galleries. To help more people enjoy the benefits art brings to individual lives and civic life, the solution is simple: Bring the art to them.

The Foundation puts art where people encounter it as they go about their daily lives. It’s along major streets and in traffic circles, on public land and high-visibility private property. The collection is large, because while city government is an enthusiastic partner, the great majority of the art is funded by private donors. In other words, Newport News enjoys a great art asset because the community makes it happen.

And so patients and visitors at Riverside Regional Medical Center’s busy campus pass the unfolding marble sculpture Helaine Blumenfeld created to offer comfort and hope, a respite, an affirmation of the Spirit of Life. Few know that the Financial Times compared her to Henry Moore, a giant of modern sculpture, but it speaks to the caliber of the collection.

As people drive around the traffic circle at Christopher
Newport University, they enjoy the changing views of Elements, and students share the campus’s Great Lawn with young Francesco and the bronze birds alighting on his outstretched arms.

Its citywide art gallery sets Newport News apart. It says, “This is a community that values quality of life,” and it gives locals a source of pride. It’s an educational resource, offering students in- person experiences with quality art and the artists who make it, as the Foundation gets sculptors involved in schools.

In 2013, the Foundation installed four new sculptures, and as it likes to say, “We’re just getting started.” The goal: a community with so much high-quality, high-visibility art that anyone looking around would say, “There’s something remarkable going on here.”

Read more…
US Airways Magazine
01/08/2014usairwaysmag.com
Back to all press