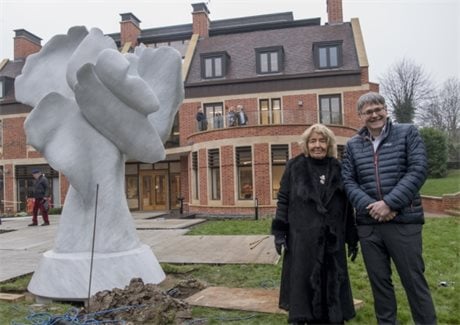 Tree of Life: Encounter at The Woolf Institute

The three-metre marble piece, entitled Tree of Life: Encounter has been two years in the making.

It is now the centrepiece of the institute, standing in the grounds of Westminster College on Madingley Road.

Helaine is the first female recipient of the Premio Pietransanta e la Versilla nel Mondo, an international award for sculpture. She lives in Grantchester, where she has a studio. The Tree of Life was completed in her studio in Italy, in the village of Pietrasanta where Michelangelo worked, sculpted from a 42-ton block of marble from the famous quarries in Carrera.

She said: “At the base you’ll see the trunk has three strands that combine and then open up as a vision of hope, expectation and realisation and, I think, spirituality. To me I think it represents what they’re doing at the Woolf Institute, which is trying to bring together Muslims, Christians and Jews, to have greater understanding of a sense of community among difference. And I think that is so important.

“We’re so much into quick fixes about what we know, I think the power of beauty is to move people to another place within themselves, not an intellectual, rational view but something emotional. Beauty is such a communicator.

“I’m very lucky at this stage of my career, I can chose public works that I do, and this is one I really wanted to do. I don’t think the world’s going to survive unless we figure out a way to bring people together. To somehow coordinate their perspectives, so that even if they see different things they’re willing to see those different things together.

“Everybody in Pietrasanta loves sculpture. I think Italians are brought up with sculpture: here, we’re just beginning to understand it. I think sculpture can define a public space and give meaning to it. In Italy, people who would see it in my studio would gasp and that’s what I want, that sense of pulling back and looking at it.

“It’s very complex. One of the wonderful things about this sculpture in particular is that no matter where you look at it, it’s the front. It’s a continuous picture. All of those views contribute to what it is. I hope the viewer will walk around it.”

Dr Edward Kessler MBE, founder director of the Woolf Institute, said: “It’s not far off two years from when Helaine and I first talked about it. When we came here then there was just a cabin here, and a hole in the ground. This is now the final piece in the jigsaw of the new Woolf Institute building.

“When we were founded back in 1998 nobody thought it had any relevance, but the world’s become a very different place, for good reasons and not so good reasons.

“The title, the Tree of Life: Encounter, very much epitomises our work. With Helaine’s work the emphasis is on the beauty and aesthetics of change and understanding and reflection, what we’re about is change, understanding and dialogue through education.

“Our students will be in the grounds, sitting on the benches, and will be caught by this work of art and have an opportunity to think in the way I hope they get in the classroom.”