IT IS hard to believe that the graceful, fluid, and organic curves of Helaine Blumenfeld’s sculptures, together with the aura of harmonious calm which surrounds them like a halo, have their origin in responses to the Holocaust.

Yet, years ago, Blumenfeld’s mother remarked that many Holocaust memorials had a “total absence of spirituality”. Blumenfeld then found herself creating a sculpture that began with what looked like the trunk of a tree formed by many bodies twisted and turning, combining and informing the trunk. She realised, as she was completing it, that it represented the victims of the Holocaust.

Instead of disappearing in smoke, however, the trunk moved upward and opened into a panoply of branches with a regrowth of blossoms, and clouds of many leaves, creating a sense of hope. Although there had been almost unbelievable destruction, she was trying to express that there could still be renewal and regeneration. The bodies were vanishing, but their loss might provoke society to respond with greater compassion and greater creativity. 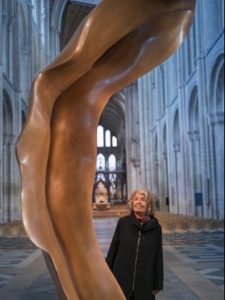 That piece was the first in a series of sculptures that have centred on the Tree of Life motif and that, therefore, have resonance with the healing leaves in the visions of Ezekiel and John of Patmos. Blumenfeld’s sculptural forms themselves derive from her own dreams. Five sculptures from the Tree of Life series are presented here together for the first time, being displayed between the nave pillars. This creates an avenue of trees and trunks beneath the cathedral’s great painted ceiling, which has as its seventh panel “The Branch from Jesse”, the original family tree, with Jesus as the shoot from the stem of Jesse (King David’s father).

This is a sumptuously curated exhibition in which a multiplicity of visual and symbolic resonances have been set up through the sympathetic placement of the sculptures within and without the astonishing vistas of this medieval masterpiece. The curator, Jacquiline Creswell, demonstrates a flawless understanding of the cathedral and the artworks in the choices she has made when selecting locations as part of this, the first sculpture exhibition at Ely.

Meridiana, an elegantly rising curve of bronze, is centrally located at the beginning of the nave, providing a frame through which to view towards the octagon, choir, and presbytery. Angels Harmony, a flourish of marble folds and flows forming wing-like shapes, points upwards, indicating the grace, space, and height of the light-filled Lady chapel, while standing as a harmonious entity in a space deliberately left broken after the iconoclasm of the Reformation.

Tree of Life: Encounter has been sensitively lit within the shadows of the north choir aisle, enabling beams of light to play upon the patina that covers its blooming, blossoming forms.

Blumenfeld works with the grain of her materials, incorporating blemishes of pigmentation and flaws into the smoothness of the surfaces, so that we can see that these pieces are not realisations of perfection, but are fashioned from struggle. They are, however, symbols of hope through their depiction of the natural cycles of growth, bloom, withering, death and renewal.

Blumenfeld has created more than 90 large-scale sculptures for private and public clients, including works at Canary Wharf, The Lancasters, the University of Cambridge, and the University of Leicester. Her work was first shown in a cathedral in 2013 (Messenger of the Spirit at Salisbury Cathedral) and has subsequently been seen at Lichfield and Gloucester. 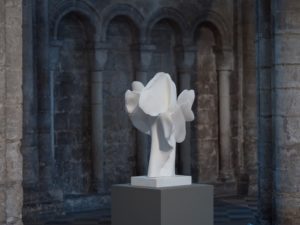 “Tree of Life” is one of Blumenfeld’s largest exhibitions to date. Her work is well suited to display in the setting of a cathedral, both because the works themselves are all about possibility and hope, healing, and renewal, and also as their luscious expanses of cream and white combine with the flow of their organic curves to contrast with the soaring vertical lines of Ely’s expanses.

Both Jewish and Christian post-Holocaust religious thought grapples with monumental questions, as the Holocaust remains the most important theological touchstone for the adequacy or otherwise of our theodicies. These works, by rooting our reflection in natural life-cycles, provide a route to regeneration and a frame through which we can ultimately view unity and beauty. They are works that assist us to look toward the stars and seek ascension.

“Exhibition of Works by Helaine Blumenfeld OBE: Tree of Life” is at Ely Cathedral until 28 October.