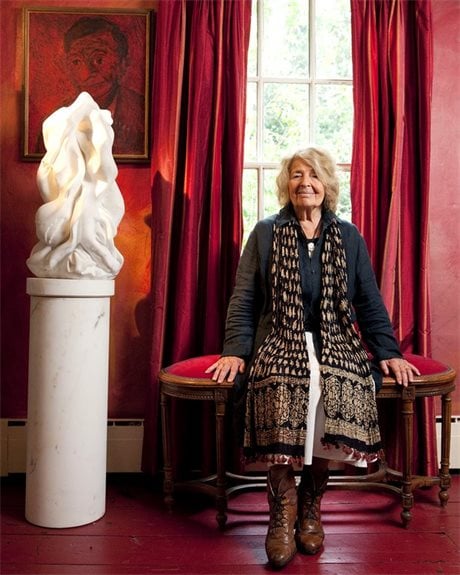 Helaine Blumenfeld in the dining room of her Cambridge home

A sculptor’s space: inside the home of Helaine Blumenfeld Blumenfeld

Helaine Blumenfeld’s house is well disguised. It lies behind a high stone wall in the centre of Grantchester, the little village outside Cambridge that has long been a favourite with students on a pre-pub stroll. Visitors enter through a little gate into a sprawling, slightly overgrown garden that surrounds the whole house. Blumenfeld’s sculptures stand in leafy corners. On a hot August day it feels as if an ancient temple is being disturbed.

Blumenfeld is one of the most respected sculptors of her generation, regarded by some as the heir to Henry Moore and Barbara Hepworth. Her marbles and bronzes are more abstracted than those of her artistic forebears, and they stand in prominent locations around the UK. A new exhibition will see a large piece unveiled in Canary Wharf, London, later this month.

For someone with such burnished credentials, however, the artist in person is welcoming and friendly. “Welcome to the only 15-bedroom one-bedroom house I know,” she says. “Originally it had six. But we have knocked some through and most of the rest have become studies.” The hallway is double height and beautifully lit by a large window above the front door. Underfoot is a monochrome tiled floor. “We pulled up two layers of linoleum and found this original floor, which had been there for hundreds of years” she says. “It’s amazing what people do.”

Born and raised in New York, Blumenfeld moved to the house in Grantchester in 1970 with her husband Yorick, a writer, and their two then-young sons, Remy and Jared. Remy is now a TV producer, Jared an environmentalist.

“We bought it from King’s College [Cambridge],” she adds. “We wanted the boys to go to school here.” There is no mistaking the accumulated clutter of decades arranged on the walls and shelves – thousands of books, artefacts from trips to Mexico and New Guinea.

“I don’t really believe in possessions,” she says. “But my husband’s family were driven out by the Holocaust, so he has a different relationship to things. He can’t leave the house without 10 suitcases.”

Much of her work is concerned with the Holocaust, with root-like shapes seeming to vanish into smoke or blossoming into flower, depending on your perspective. In contrast to her husband’s hoarding she says she prefers a minimalist aesthetic, and the studio in Italy where she works for several months of the year is refreshingly uncluttered.

To the left of the hallway is the dining room, painted in shades of deep red to match an oil painting that hangs in one corner – a self-portrait of Yorick’s father, Erwin, a famous photographer who was once accused of being a sell-out, hence the red-light-district hues. It’s the oldest part of the house, dating from 1490 – the rest of the house is 18th century – although in the far corner is a modern enhancement: a discreet lift, which Yorick and Helaine use to transport sculptures and books upstairs. On the other side of the hallway is a sitting room, with one of Blumenfeld’s pieces on display in the window. “Even on a dark day you get a wonderful sense of translucency,” she says.

An airy conservatory running alongside Blumenfeld’s kitchen serves as her studio. It is reminiscent of Hepworth’s space in St Ives, now a museum. Completed pieces vie with works-in-progress for shelf space. A lock on the door allowed her to work while her children were banging on the door. “I’m afraid I wasn’t a very good mother at times,” she says, recounting a time when one of her sons ran in and attacked a work in progress like a jealous lover.

Back in the garden she points out things that the casual observer might not notice: a sculpture that was stolen in 2005 before being recovered by police two years later. A treehouse where Yorick wrote his first novel. The huge Lebanon cedar tree from which the house gets its name. The front lawn, which is said to be stalked at Christmas by the ghost of a young woman, a former owner’s mistress who was thrown out into the snow.

“I wouldn’t mind having a little place in London when we get older, but we could never sell this place,” Blumenfeld says. “It has been a wonderful family home. Even with the ghost.”