A monumental marble sculpture ‘Tree Of Life: Encounter’ by Helaine Blumenfeld OBE has been specially commissioned for the Woolf Institute’s new building on the site of Westminster College, Cambridge. The sculpture was recently completed in Italy and will be installed Thursday 11 January in the courtyard of the Institute’s new purpose-built headquarters. ‘Tree Of Life: Encounter’ stands 3 metres tall and weighs 4500 kg, sculpted from a 42-ton block of marble from the famous quarries in Carrera, Italy.

Blumenfeld has created more than 90 public sculptures, among the most notable are ‘Tempesta’ overlooking Hyde Park in London and ‘Fortuna’ in Jubilee Park at Canary Wharf. A long-time believer in the power of the sculpture to ‘serve the public good,’ Blumenfeld has also been commissioned to create several public sculptures in the Cambridge area including ‘Flame’ at Clare Hall, ‘Shadow Figures’ at Vision Park in Histon and ‘The Chauvinist’ at UNEX House on Hills Rd.

Blumenfeld has lived and worked in Grantchester for many years and has received world-wide recognition for her sculptures. She was the first female recipient of the Premio Pietransanta e la Versilla nel Mondo, an international award for sculpture, and was awarded an honorary OBE by Her Majesty, Queen Elizabeth II. Regarding the inspiration behind ‘Tree Of Life: Encounter’, she says:

“Tree Of Life: Encounter was inspired by the aims of the Woolf Institute to bring about understanding between Jews, Christians and Muslims in order to reduce intolerance, as expressed in the words inscribed on its foundation stone “A threefold cord is not quickly broken [Ecclesiastes 4.12]

Tree Of Life: Encounter is a powerful statement of the struggle for unity, with three strands joining together at the base and moving upward through dissonance and chaos to a beautiful flowering of hope.”

The sculpture will be open to the public, and can be viewed by visitors to the Woolf Institute.

News from the BBC 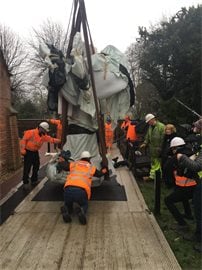 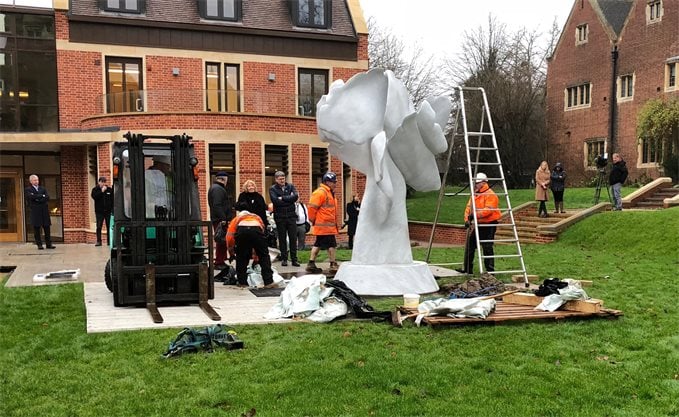