2015 marks the 30th anniversary of Henry Moore and Helaine Blumenfeld’s seminal joint exhibition, A British Dialogue: From Perry Green to Cambridge, at the Alex Rosenberg Gallery, New York. To celebrate, Bowman Sculpture in London presents a major new exhibition reuniting their work, Helaine Blumenfeld / Henry Moore: A Dialogue 1985-2015. The exhibition, which coincides with a new work by Blumenfeld being installed in London’s Berkeley Square, runs 22 May – 30 June 2015.

2015 marks the 30th anniversary of Henry Moore and Helaine Blumenfeld’s seminal joint exhibition, A British Dialogue: From Perry Green to Cambridge, at the Alex Rosenberg Gallery, New York. To celebrate, Bowman Sculpture in London presents a major new exhibition reuniting their work, Helaine Blumenfeld / Henry Moore: A Dialogue 1985-2015. The show will include previously unexhibited works by both artists from private collections, together with sculptures from the original 1985 exhibition and exciting new works by Helaine Blumenfeld OBE. The exhibition, which coincides with a new work by Blumenfeld being installed in London’s Berkeley Square, runs 22 May – 30 June 2015.

Both Blumenfeld and Moore are radical pioneers in carving who have each evolved their own distinctive vocabularies of form. This exhibition takes a fresh look at the legacy of Moore as one of the greatest British artists as well as his influence on Blumenfeld, one of Britain’s leading contemporary sculptors working in marble and bronze, who is often hailed as ‘the heir to Moore’ and her works as ‘the Moores of the future’.

Helaine Blumenfeld OBE (b.1942, New York) is based between studios in Cambridge, UK and Pietrasanta, Italy.

Art critic and lecturer, Alan Caine, says: “Moore and Blumenfeld are two sculptors who share an interest in elemental images usually based on the human body. They also share a level of abstraction which does not dwell on narratives, personalities and direct portraits but searches for a spiritual dimension which is monumental – and in many ways transcendent. With those elements in common, they seem to inhabit two ends of a spectrum which make their work very different: Moore is earth and solid; Blumenfeld is air and light. Moore is ‘masculine’, forceful, solid; Blumenfeld is ‘feminine’, sensuous.’

Robert Bowman of Bowman Sculpture says: ‘The technical skill in being able to carve stone and model in clay is most rare. Not even Rodin could do both. Blumenfeld and Moore are masters of their materials and their monumental works are synonymous with the London landscape, winning them both a place in the nation’s heart.’

Helaine Blumenfeld OBE
Helaine Blumenfeld (b. 1942) is an internationally acclaimed sculptor. Born in New York, Blumenfeld studied at Columbia University, New York, followed by Oxford University, UK, where she completed a PhD in Philosophy in 1964. Following her studies, Blumenfeld moved to Paris to sculpt and soon became the favoured pupil of Ossip Zadkine. In 1973, Blumenfeld moved to England and the same year exhibited at Kettles Yard, Cambridge. 1978 marked a turning point in Blumenfeld’s work when she first visited Pietrasanta, Italy and started carving marble. In 1985 Blumenfeld had a joint exhibition with Henry Moore at the Alex Rosenberg Gallery, New York entitled ‘Moore: Blumenfeld – a Dialogue’. Now firmly established as one of the most accomplished and respected figures in contemporary sculpture, Blumenfeld is a master of both bronze and marble.

In 2007 Blumenfeld won the Il Premio Pietrasanta e la Versilia Nel Mondo, adding her name to the list of winners of this honour including Botero, Pomodoro and Marc Quinn. Blumenfeld was the first woman to receive this prestigious award. In 2008 the Royal British Society of Sculptors held a major retrospective of her work. In 2011 Blumenfeld was awarded an honourary OBE. Jeremy Hunt MP, Secretary of State for Culture presented the award saying ‘‘It acknowledges your remarkable contribution to the arts as one of the boldest and most diverse artists working today. Your pioneering approach has placed you at the forefront of contemporary sculpture.’’

Blumenfeld’s public commissions include the three meter high monumental marble Tempesta at The Lancasters overlooking Hyde Park, London which was installed in 2012. From April-September 2013 Salisbury Cathedral hosted ‘Messenger of the Spirit’, an exhibition of 20 sculptures exhibited within the cathedral itself and monumental works throughout the grounds. Blumenfeld’s latest exhibit was the four meter high monumental marble ‘Spirit of Life’ by Helaine Blumenfeld which was on Park Lane, London in 2014. Blumenfeld says of the sculpture “Some see it as an angel with its wings spread open, others as a tree of life, while some view it as hands reaching out in hope. But everyone recognises that this sculpture is about the positive power of beauty, of hope and of creation. I would like to see beautiful sculpture re-enter the lives of people, to take its place as part of a restoration of the human Spirit.” www.helaineblumenfeld.com

Bowman Sculpture
Bowman Sculpture is based at 6 Duke Street, St James’s, London, and is the foremost gallery in the world for sculpture by Auguste Rodin. The gallery starts its sculptural journey with European Romantic sculpture of the 19th century, dealing in the masters of this period such as Jean-Baptiste Carpeaux, Albert- Ernest Carrier-Belleuse and Aimé-Jules Dalou through to the Impressionist, Modern and Cubist sculpture of Edgar Degas, Henri Laurens and Ossip Zadkine. They specialise in the work of the English New School sculptors including Alfred Gilbert, Lord Frederic Leighton and Alfred Drury.

In 2014, Robert Bowman celebrated his 20th year chairing the 19th and 20th century sculpture vetting committee of TEFAF Maastricht, testament to his reputation as the leading specialist in this field. In May, the gallery presented the largest group of Rodin bronzes exhibited in the UK since the Royal Academy’s ‘Rodin’ show in 2007. ‘Rodin- In Private Hands’, combined a selection of sculptures available for sale together with key pieces the gallery have placed in collections throughout its history. www.bowmansculpture.com 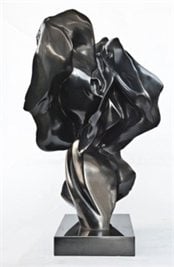 Sinfonia, 2014, patinated bronze
Back to all news